El Cucuy Is Scared, Too! (Hardcover) 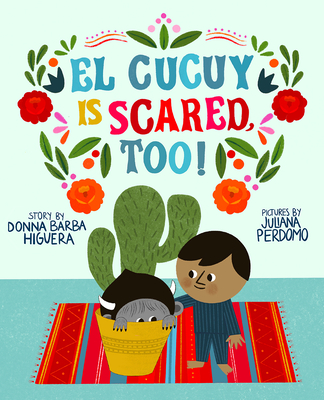 El Cucuy Is Scared, Too! (Hardcover)

Ramón is a little boy who can’t sleep. He is nervous for his first day at a new school.
And El Cucuy is the monster who lives in Ramón’s cactus pot. He can’t sleep, either.
It turns out that El Cucuy is scared, too!
This gentle, perceptive story explores the worries that can accompany moving to a new place and beginning a new journey—and reveals how comfort, bravery, and strength can be found through even the most unexpected of friendships.

Donna Barba Higuera grew up dodging dust devils in the oil fields of central California. She was a daydreamer, constantly blending life experiences and folklore into stories. Now she weaves them into picture books and novels. Higuera currently lives in the Pacific Northwest with her husband, four children, three dogs, and two frogs. El Cucuy Is Scared, Too! was her debut picture book, and she is also the author of the middle-grade novels The Last Cuentista, winner of the Newbery Medal and Pura Belpré Award, and Lupe Wong Won’t Dance, winner of a Pura Belpré Honor, the Sid Fleischman Award for Humor, and a Pacific Northwest Booksellers Award. Cynthia Alonso is an illustrator and graphic designer from Buenos Aires, Argentina. She is currently living in Berlin working worldwide on fiction and nonfiction children books, surface design, and editorial illustration. Her debut picture book in the United States, Aquarium, was published by Chronicle Books.

Juliana Perdomo is a Colombian illustrator and writer, with a background as a psychologist and art therapist. Her work is joyful and heartfelt, folkish, and a bit retro with a Latin touch. She has participated in different projects as an illustrator, this book being her debut in the United States. Perdomo lives in Bogotá, Colombia, with her amazing son Luca and a crazy old dog named Menta.
"Higuera fluidly intersperses Spanish words throughout the text, and their meanings can be inferred from context... These additions grant a depth to Ramón’s backstory and show his individuality while highlighting the differences he may encounter in his unfamiliar environment. Perdomo’s digital illustrations in vibrant hues pay homage to Ramón’s heritage. "
— The Horn Book Magazine

"This exploration of children in transition reminds readers that change can make even El Cucuy insecure."
— Kirkus Reviews