The Unseen Photos of Street Gang: How We Got to Sesame Street (Hardcover) 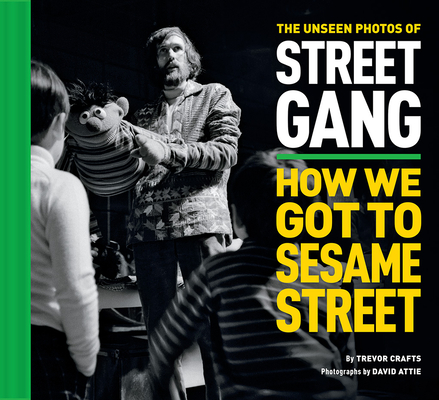 The Unseen Photos of Street Gang: How We Got to Sesame Street (Hardcover)


This title is likely unavailable. Email or call for price and availability.
The official companion book to the feature-length documentary Street Gang: How We Got to Sesame Street, featuring previously unpublished photographs from the first season of Sesame Street and interviews with cast and crew

The Unseen Photos of Street Gang: How We Got to Sesame Street expands on the film’s exploration of the origins and legacy of Sesame Street with exclusive interviews and previously unpublished photographs from the first season of the globally beloved children's series. Author and filmmaker Trevor Crafts, who was given unprecedented access to archival footage and photography, presents more than 150 of photographer David Attie’s behind-the-scenes images of Jim Henson, Will Lee, Loretta Long, Bob McGrath, Frank Oz, Matt Robinson, Caroll Spinney, Big Bird, Oscar the Grouch, Bert and Ernie, and dozens of other pioneering puppeteers, animators, actors, and Sesame Street Muppets. Crafts uses Attie’s remarkable photos and additional interviews from the film to dive deeper into the story of how show creator Joan Ganz Cooney, along with Sesame Workshop cofounder Lloyd Morrisett, director Jon Stone, and Muppet creator Jim Henson, took the values and goals of the civil rights movement and revolutionized children’s television.

The book is a tribute to the enduring achievements of an ingenious group of artists, educators, and television pioneers who believed that the values of equality, education, and inclusion should not just be championed but also made available to all—a dream that Sesame Street has carried forward for more than fifty years.
Trevor Crafts is an award–winning producer whose works include Street Gang: How We Got to Sesame Street and Lantern City, based on his own BOOM! Studios comic-book series. He is the CEO of Macrocosm Entertainment and lives in Los Angeles, California.

David Attie was a fine-art and commercial photographer whose work appeared in Time, Harper’s Bazaar, Playboy, and Newsweek during the course of his more than thirty-year career. His relationship to Sesame Street dates back to 1970, when he photographed the second season of the show on assignment for Amerika, a Russian-language magazine published by the U.S. and distributed in the Soviet Union during the Cold War.

Sonia Manzano is an actress, writer, public speaker, and musician best known for playing Maria on Sesame Street from 1971 to 2015. She lives in New York City.

Michael Davis was a senior editor and family television columnist for TV Guide from 1998 to 2007. A Neiman Fellow, he has also worked for the Baltimore Sun and Chicago Sun-Times. He is the author of Street Gang: The Complete History of Sesame Street (Penguin, 2008).