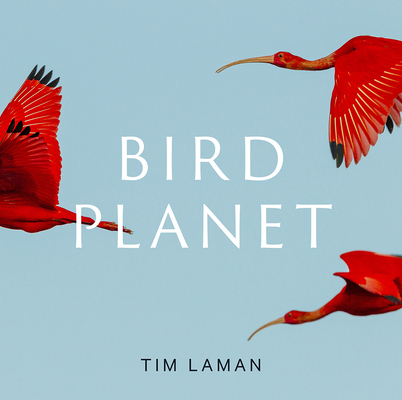 Birder extraordinaire Tim Laman is a superstar in one of photography’s most challenging pursuits: The quest to portray birds in the wild. A naturalist and explorer as well as a brilliant image maker, he has spent thousands of hours over more than 30 years wedged precariously in the tops of trees, often in remote jungles, in the hope that careful planning and good fortune will align to produce the perfect picture. His is a passion shared by all birders, carried to the level of art.

Bird Planet takes the reader on a journey to the world of birds. Laman shares his best images of spectacular birds on all continents, from the scarlet ibis of the Orinoco River in Venezuela to rhinoceros hornbills in the rainforests of Borneo; his familiar backyard American birds are as memorable as his poetic red-crowned cranes in snowy Japan. His signature achievement—to photograph all the known species of birds of paradise, spending 18 months in New Guinea over eight years—gets a chapter, as does his visits to the penguins of Antarctica. Immensely knowledgeable about both nature and photography, Laman is the perfect guide to the kingdom of the birds.

Tim Laman is a contributing photographer for National Geographic magazine and makes films for the BBC Natural History Unit and the Cornell Lab of Ornithology. He has won numerous awards for his photography and cinematography, including Wildlife Photographer of the Year in 2016. He is an associate of Harvard University's Museum of Comparative Zoology, a fellow of the Explorers Club, a founding member of the International League of Conservation Photographers, and a founder of the Cornell Lab of Ornithology's Birds-of-Paradise Project. He lives in Lexington, Massachusetts.