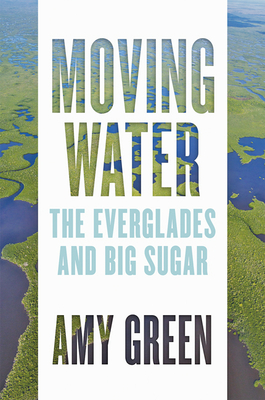 Only a century ago, nearly all of South Florida was under water. The Everglades, one of the largest wetlands in the world, was a watery arc extending over 3 million acres. Today, that wetland ecosystem is half of its former self, supplanted by housing for the region's exploding population and over 700,000 acres of crops, including the nation's largest supply of sugar cane. Countless canals, dams, and pump stations keep the trickle flowing, but rarely address the cascade of environmental consequences, including dangerous threats to a crucial drinking water source for a full third of Florida's residents.

In Moving Water, environmental journalist Amy Green explores the story of unlikely conservation heroes George and Mary Barley, wealthy real estate developers and champions of the Everglades, whose complicated legacy spans from fisheries in Florida Bay to the political worlds of Tallahassee and Washington. At the center of their surprising saga is the establishment and evolution of the Comprehensive Everglades Restoration Plan (CERP), a $17 billion taxpayer-funded initiative aimed at reclaiming this vital ecosystem. Green explains that, like the meandering River of Grass, the progress of CERP rarely runs straight, especially when it comes up against the fierce efforts of sugar-growing interests, or Big Sugar, to obstruct the cleanup of fertilizer runoff wreaking havoc with restoration.

This engrossing expos tackles some of the most important issues of our time: Is it possible to save a complex ecosystem such as the Everglades--or, once degraded, are such ecological wonders gone forever? What kind of commitments--economic, scientific, and social--will it take to rescue our vulnerable natural resources? What influences do special interests wield in our everyday lives, and what does it take to push real reform through our democracy? A must-read for anyone fascinated by stories of political intrigue and the work of environmental crusaders like Erin Brockovich, as well as anyone who cares about the future of Florida, this book reveals why the Everglades serve as a model--and a warning--for environmental restoration efforts worldwide.

Amy Green is an award-winning radio and print journalist covering the environment at NPR affiliate station WMFE 90.7. After beginning her career at The Associated Press, she has worked as a regular contributor to PEOPLE, Newsweek, the New York Times, and the Christian Science Monitor, among other publications.