Becoming T. S. Eliot: The Rhetoric of Voice and Audience in Inventions of the March Hare (Paperback) 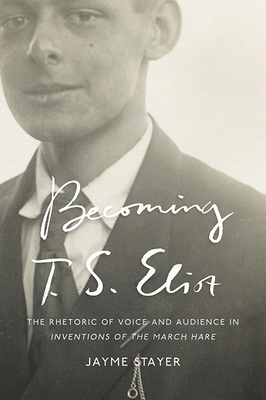 Becoming T. S. Eliot: The Rhetoric of Voice and Audience in Inventions of the March Hare (Paperback)

How did an ordinary, if intelligent, boy who wrote unremarkable poems become--with no help, and in record time--the author of one of the most significant and beloved poems of the twentieth century?

T. S. Eliot's juvenilia show little inclination to question the social, cultural, religious, or domestic values he had inherited. How did a young man who wrote uninspired doggerel about wilting flowers transform himself--in a mere twenty months--into the author of The Love Song of J. Alfred Prufrock? In Becoming T. S. Eliot, Jayme Stayer--praised by Christopher Ricks as a scholar who is scrupulous in acknowledging the contingencies that will always preclude perfection--explains this staggering accomplishment by tracing Eliot's artistic and intellectual development. Relying on archival research and original analysis, this is the first book dedicated entirely to Inventions of the March Hare, Eliot's youthful notebook, which was once thought lost but was rediscovered after Eliot's death. Stayer places Eliot's verses in the chronological order of their composition, teasing out the narratives of their making. Focusing on the period from 1909 to 1915, this incisive portrait of Eliot as a budding writer is as much a study of Eliot himself as it is a study of how a writer hones his voice.

Jayme Stayer is an associate professor of literature at Loyola University Chicago and the president of the International T. S. Eliot Society. He is the editor of T. S. Eliot, France, and the Mind of Europe and the coeditor of Tradition and Orthodoxy, 1934-1939, the fifth volume of The Complete Prose of T. S. Eliot: The Critical Edition.