The Making of a Tropical Disease: A Short History of Malaria (Johns Hopkins Biographies of Disease) (Paperback) 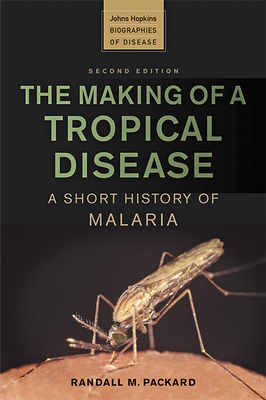 The Making of a Tropical Disease: A Short History of Malaria (Johns Hopkins Biographies of Disease) (Paperback)

A global history of malaria that traces the natural and social forces that have shaped its spread and made it deadly, while limiting efforts to eliminate it.

Malaria sickens hundreds of millions of people--and kills nearly a half a million--each year. Despite massive efforts to eradicate the disease, it remains a major public health problem in poorer tropical regions. But malaria has not always been concentrated in tropical areas. How did malaria disappear from other regions, and why does it persist in the tropics?

From Russia to Bengal to Palm Beach, Randall M. Packard's far-ranging narrative shows how the history of malaria has been driven by the interplay of social, biological, economic, and environmental forces. The shifting alignment of these forces has largely determined the social and geographical distribution of the disease, including its initial global expansion, its subsequent retreat to the tropics, and its current persistence. Packard argues that efforts to control and eliminate malaria have often ignored this reality, relying on the use of biotechnologies to fight the disease. Failure to address the forces driving malaria transmission have undermined past control efforts.

Describing major changes in both the epidemiology of malaria and efforts to control the disease, the revised edition of this acclaimed history, which was chosen as the 2008 End Malaria Awards Book of the Year in its original printing,

Authoritative, fascinating, and eye-opening, this short history of malaria concludes with policy recommendations for improving control strategies and saving lives.

Randall M. Packard is a professor of the history of medicine at Johns Hopkins University. He is the author of White Plague, Black Labor: Tuberculosis and the Political Economy of Health and Disease in South Africa and A History of Global Health: Interventions into the Lives of other Peoples.