The Prince of Tennis, Vol. 29 (Paperback) 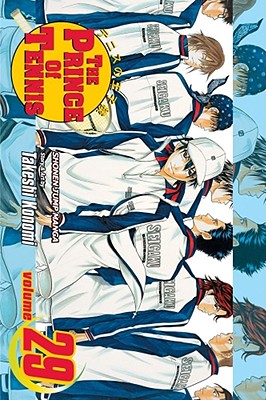 The Prince of Tennis, Vol. 29 (Paperback)

This is book number 29 in the The Prince of Tennis series.

After arriving at the Nationals, Seishun scouts their upcoming opponents: their old rivals Rokkaku and an unknown team from Okinawa, Higa Junior High. After watching Higa mow through their first-round match-ups, the Seishun players are taken aback by the team's dominance. But there's no time for doubt--the second round is starting, and it's Ryoma versus Higa's heavy hitter, the giant Kei Tanishi and his unreturnable "Big Bang" serve.
Takeshi Konomi exploded onto the manga scene with the incredible The Prince of Tennis. His refined art style and sleek character designs proved popular with Weekly Shonen Jump readers, and The Prince of Tennis became the number one sports manga in Japan almost overnight. Its cast of fascinating male tennis players attracted legions of female readers even though it was originally intended to be a boys' comic. The manga continues to be a success in Japan and has inspired a hit anime series, as well as several video games and mountains of merchandise.