The Prince of Tennis, Vol. 37 (Paperback) 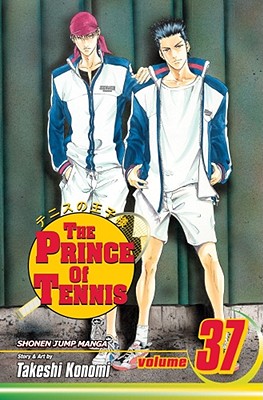 The Prince of Tennis, Vol. 37 (Paperback)

This is book number 37 in the The Prince of Tennis series.

Seishun's semifinal matches against Shitenhoji continue, and now it's Kaoru and Momo's turn in No. 2 Doubles. Their opponents, Koharu Konjiki and Yuji Hitoji, are highly skilled players but have a style that's a little...unusual. Next, two power players step onto the court for No. 2 Singles: Taka and Gin Ishida, the originator of Taka's Hadokyu shot. In this match of Hadokyu vs. Hadokyu, it's the last player standing who'll win!
Takeshi Konomi exploded onto the manga scene with the incredible The Prince of Tennis. His refined art style and sleek character designs proved popular with Weekly Shonen Jump readers, and The Prince of Tennis became the number one sports manga in Japan almost overnight. Its cast of fascinating male tennis players attracted legions of female readers even though it was originally intended to be a boys' comic. The manga continues to be a success in Japan and has inspired a hit anime series, as well as several video games and mountains of merchandise.