The Prince of Tennis, Vol. 40 (Paperback) 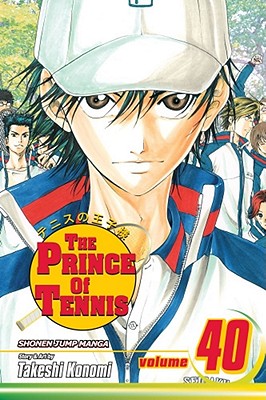 The Prince of Tennis, Vol. 40 (Paperback)

This is book number 40 in the The Prince of Tennis series.

The match between Seishun captain Tezuka and Rikkai's Sanada blares on. Sanada takes his captain's advice and attacks Tezuka where he's most vulnerable. Has the captain of Seishun finally met his doom? Next, Kaoru and Sadaharu take on Rikkai's lethal pair. When they target Sadaharu, Kaoru has to pull out his Gyro Laser Beam to save the match. And Ryoma finally arrives at the arena! Unfortunately for Seishun, he's got a wicked case of amnesia.
Takeshi Konomi exploded onto the manga scene with the incredible The Prince of Tennis. His refined art style and sleek character designs proved popular with Weekly Shonen Jump readers, and The Prince of Tennis became the number one sports manga in Japan almost overnight. Its cast of fascinating male tennis players attracted legions of female readers even though it was originally intended to be a boys' comic. The manga continues to be a success in Japan and has inspired a hit anime series, as well as several video games and mountains of merchandise.