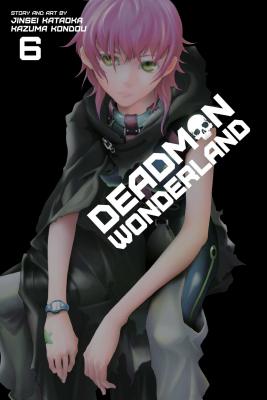 This is book number 6 in the Deadman Wonderland series.

A post-apocalyptic story of survival in a surreal prison built in the ruins of Tokyo.

Framed for the brutal murders of his classmates by the mysterious Red Man, middle school student Ganta Igarashi finds himself sentenced to death and sent to the bizarre and fatal theme park/prison that has risen from the ruins of the Great Tokyo Earthquake—a hell on earth known as “Deadman Wonderland.”

Despite the loss of their leader, Scar Chain manages to defeat the Undertakers and escape, but Ganta and Shiro stay to fight on. Tamaki, the insane mastermind of Deadman Wonderland, initiates his next plan—the development and deployment of the Ninben, artificially created Deadmen—and Ganta’s friend Azami is one of his first test subjects!