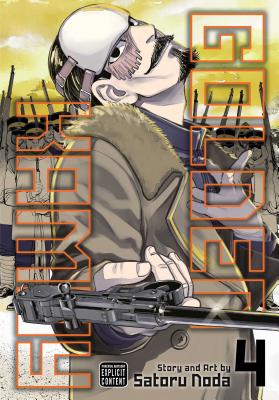 This is book number 4 in the Golden Kamuy series.

A tale of high adventure and survival!

In the early twentieth century, Russo-Japanese War veteran Saichi Sugimoto searches the wilderness of Hokkaido for a hoard of hidden gold. With only a cryptic map and a native Ainu girl to help him, Saichi must also deal with every murderous cutthroat, bandit and rogue who knows about the treasure!

Tetsuzo Nihei, the legendary Bear Killer, is determined to become the hunter who kills Retar, the last remaining Ezo wolf. Asirpa will never allow this, and she and Immortal Sugimoto race to stop his bloodthirsty quest. Meanwhile, in the port city of Otaru, Hijikata, the relentless head of the reborn Shinsengumi, leads a band of death row inmates against Lt. Tsurumi and his 7th Division. In this clash of iron resolve, only the strongest will survive.