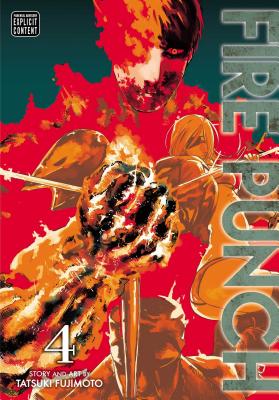 This is book number 4 in the Fire Punch series.

Boss, the leader of the Behemdorg escapees, finds he’s at a disadvantage when fighting the soldiers who continue pursuing them. But all that changes with the sudden appearance of a mysterious spear-wielding girl and a masked man, who are willing to lend their aid. Meanwhile, will Agni have to perform that certain act once again for those who revere him?!
Tatsuki Fujimoto won Honorable Mention in the November 2013 Shueisha Crown Newcomers’ Awards for his debut one-shot story “Love Is Blind.” His first series, Fire Punch, ran for eight volumes. Chainsaw Man began serialization in 2018 in Weekly Shonen Jump. “Look Back” and “Goodbye, Eri” were published in 2021 and 2022 in Japan to widespread critical acclaim.