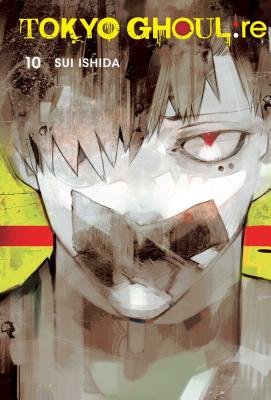 This is book number 10 in the Tokyo Ghoul: re series.

Haise Sasaki is no more. In his place, Ken Kaneki has emerged and accepted the role of the One-Eyed King. He sees a vision of the future where Ghouls and humans can coexist. But a faction at the CCG wants to prevent that peace by any means necessary, and the inevitable death toll means nothing to them.
Sui Ishida was born in Fukuoka, Japan. He is the author of Tokyo Ghoul and several Tokyo Ghoul one-shots, including one that won him second place in the Weekly Young Jump 113th Grand Prix award in 2010. Tokyo Ghoul began serialization in Weekly Young Jump in 2011 and was adapted into an anime series in 2014.