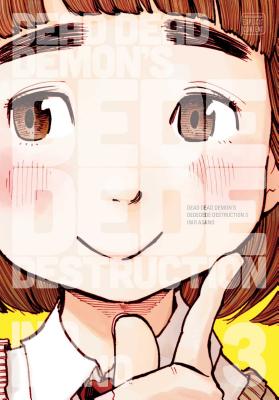 This is book number 3 in the Dead Dead Demon’s Dededede Destruction series.

Nothing was ever the same again.

But after a while, even impending doom starts to feel ordinary.

The defense business is booming in Japan, and the amazing Hujin weapons are finally getting their chance to shine. But civilians are fed up with the inconvenience of being collateral damage, and their protest signs are starting to get really pointed! Meanwhile, Kadode has to face up to the realities of living in an apocalypse and not taking her college entrance exams seriously. At least high school is finally over!
Inio Asano, a bona fide earthling, was born in Ibaraki, Japan, in 1980. In 2001, his short story “Uchu kara Konnichiwa” (Hello from Outer Space) won the first Sunday GX Rookie Prize. Later, GX published his series Subarashii Sekai, available in English from VIZ Media as What a Wonderful World! His other works include Hikari no Machi (City of Light), Nijigahara Holograph and Umibe no Onna no Ko (A Girl on the Shore), as well as solanin and Goodnight Punpun, also available from VIZ Media.