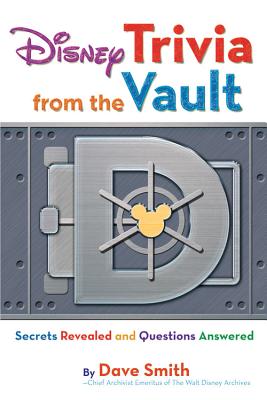 
This title is likely unavailable. Email or call for price and availability.
A treasure trove of Disney trivia by Dave Smith, Chief Archivist Emeritus of the Walt Disney Archives!
Beginning with the July 1983 issue of Disney Channel Magazine, Dave Smith began answering Disney trivia questions from viewers of the Disney Channel. In the ensuing thirty years, his column has continued through multiple publications, including Disney Magazine, the on-line "Disney Insider," and most recently the D23 website. "Ask Dave" questions have come from Disney enthusiasts the world over, and have covered topics ranging from Cinderella's last name (Tremaine) to the number of triangles covering the surface of Epcot's Spaceship Earth (11,324 facets comprising 954 triangles.)

Over 1,100 questions have been fielded by Dave, and this book is a compendium of the most interesting and revealing of those queries. The book is divided into chapters that each cover an aspect of Disney history, including Disneyland, Walt Disney World, Disney films, Disney television, and Disney characters. Many of the questions bring up interesting information that has not been published elsewhere, and readers will delight in discovering some of the secrets behind their favorite movies and theme parks. "Did the same actress provide the voice of Maleficent, as well as the voice of Madame Leota, the head in the crystal ball in The Haunted Mansion?" "Who was the first athlete to say 'I'm going to Disneyland!'?" Only Dave knows the answers!
Searching for that perfect gift for the #1 Disney fan in your life? Explore more behind-the-scenes stories from Disney Editions:
In addition to founding the Walt Disney Archives in 1970 and serving as chief archivist for more than forty years, Disney Legend Dave Smith was a featured speaker at many Disney events.
Beginning with the July 1983 issue of Disney Channel Magazine, Dave began answering Disney trivia questions from viewers of the Disney Channel. In the ensuing thirty years, his "Ask Dave" column has continued through multiple publications, including Disney Magazine, the online Disney Insider, the D23 Web site, and his question-and-answer books Disney Trivia from the Vault: Secrets Revealed and Questions Answered and Disney Fact Revealed: Answers to Fans' Curious Questions.
Dave also coauthored all volumes of The Ultimate Disney Trivia Book 1?4 and Disney: The First 100 Years (and its update.) He compiled The Quotable Walt Disney, as well as all editions of Disney A to Z. He was honored as a Disney Legend in 2007.