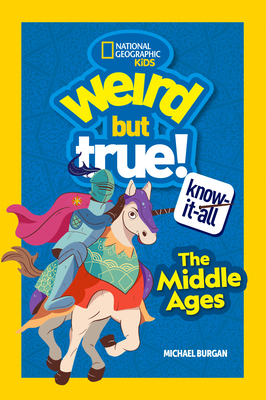 
Available for Pre-Order Now
The Middle Ages come to life in this latest installment in the hit Weird But True Know-It-All series, featuring stories of legendary rulers, epic castles, menacing weaponry, and more!

Vikings are known for being fierce warriors. But did you know that they used tug-of-war to train for battle—and that the losing team was pulled into a pit of fire?

Europe was ravaged by the plague during the Middle Ages. But did you know that the secret ingredient in one cure concocted by medieval doctors was ... “dragons’ blood”?!

Go beyond the Middle Ages of Europe to explore great empires around the globe, including Ottoman, Shona, Aztec, and the Song dynasty. From Joan of Arc to Genghis Khan, incredible inventions to eyebrow-raising medieval medicines, you’ll know it all by the time you finish this book.

Packed with important historical information along with the wackiest and weirdest facts ever about the Middle Ages!

Weird But True Know-It-All Rocks and Minerals
MICHAEL BURGAN is an award-winning children's author with more than 25 years in the industry. His past books include Shadow Catcher (a Woodson Honor Book), Tank Man, Who Was HenryFord?,and Who Was TheodoreRoosevelt?.