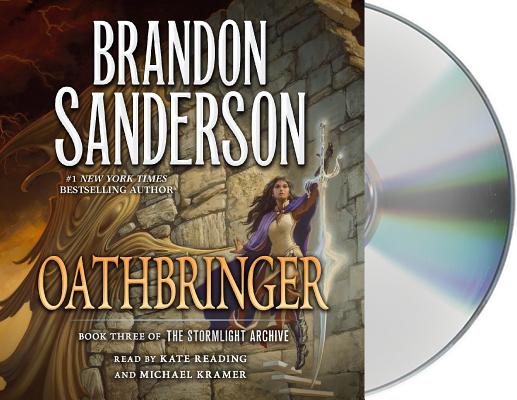 By Brandon Sanderson, Michael Kramer (Read by), Kate Reading (Read by)
$94.99
Email or call for price.

This is book number 3 in the The Stormlight Archive series.

"Character development is at the heart of the book, and it is here that Kramer and Reading shine, with remarkably consistent and multifaceted characters that fuel the action of the story...Adept pacing highlights both the intensity of hand-to-hand combat and quieter moments of sorrow and grief, fully realizing the intricate world that Sanderson has created." — AudioFile Magazine

The eagerly awaited sequel to the #1 New York Times bestselling Words of Radiance, from epic fantasy author Brandon Sanderson at the top of his game.

In Oathbringer, the third audiobook in the New York Times bestselling Stormlight Archive, humanity faces a new Desolation with the return of the Voidbringers, a foe with numbers as great as their thirst for vengeance.

Dalinar Kholin’s Alethi armies won a fleeting victory at a terrible cost: The enemy Parshendi summoned the violent Everstorm, which now sweeps the world with destruction, and in its passing awakens the once peaceful and subservient parshmen to the horror of their millennia-long enslavement by humans. While on a desperate flight to warn his family of the threat, Kaladin Stormblessed must come to grips with the fact that the newly kindled anger of the parshmen may be wholly justified.

Nestled in the mountains high above the storms, in the tower city of Urithiru, Shallan Davar investigates the wonders of the ancient stronghold of the Knights Radiant and unearths dark secrets lurking in its depths. And Dalinar realizes that his holy mission to unite his homeland of Alethkar was too narrow in scope. Unless all the nations of Roshar can put aside Dalinar’s blood-soaked past and stand together—and unless Dalinar himself can confront that past—even the restoration of the Knights Radiant will not prevent the end of civilization.


Other Tor books by Brandon Sanderson

The Mistborn trilogy
Mistborn: The Final Empire
The Well of Ascension
The Hero of Ages

Mistborn: The Wax and Wayne series
Alloy of Law
Shadows of Self
Bands of Mourning

Other books by Brandon Sanderson

Michael Kramer has narrated over 100 audiobooks for many bestselling authors. He read all of Robert Jordan’s epic Wheel of Time fantasy-adventure series as well as Brandon Sanderson’s The Stormlight Archive series. He received AudioFile magazine's Earphones Award for the Kent Family series by John Jakes and for Alan Fulsom's The Day After Tomorrow. Known for his “spot-on character portraits and accents, and his resonant, well-tempered voice” (AudioFile), his work includes recording books for the Library of Congress’s Talking Books program for the blind and physically handicapped.

Kramer also works as an actor in the Washington, D.C. area, where he lives with his wife, Jennifer Mendenhall (a.k.a. Kate Reading), and their two children. He has appeared as Lord Rivers in Richard III at The Shakespeare Theatre, Howie/Merlin in The Kennedy Center’s production of The Light of Excalibur, Sam Riggs and Frederick Savage in Woody Allen’s Central Park West/Riverside Drive, and Dr. Qari Shah in Tony Kushner’s Homebody/Kabul at Theatre J.

Kate Reading is the recipient of multiple AudioFile Earphones Awards and has been named by AudioFile magazine as a “Voice of the Century,” as well as the Best Voice in Science Fiction & Fantasy in 2008 and 2009 and Best Voice in Biography & Culture in 2010. She has narrated works by such authors as Jane Austen, Robert Jordan, Edith Wharton, and Sophie Kinsella. Reading has performed at numerous theaters in Washington D.C. and received a Helen Hayes Award for her performance in Aunt Dan and Lemon. AudioFile magazine reports that, "With subtle control of characters and sense of pacing, Kate’s performances are a consistent pleasure."

"Narrators Michael Kramer and Kate Reading transport listeners to the storm-ravaged world of Roshar, where Dalinar Kholin prepares for the coming epic battle against the Voidbringers. Character development is at the heart of the book, and it is here that Kramer and Reading shine, with remarkably consistent and multifaceted characters that fuel the action of the story. Kramer's resonant, gravelly voice skillfully communicates Dalinar's inner turmoil as he faces the consequences of his violent past. ." -AudioFile

"[This] is a character-driven book, and Kramer’s and Reading’s portrayals will help listeners settle in for the intertwined plotlines as the protagonists carry out their separate but connected stories. Each narrator draws on a deep reserve of voices and accents while maintaining a quick pace. Equally adept with dialogue, rumination, and long narrative passages, they make the hours fly by."—AudioFile Magazine on Words of Radiance, Book Two of the Stormlight Archive. An earphones Award winner and 2015 Audie Award Winner.