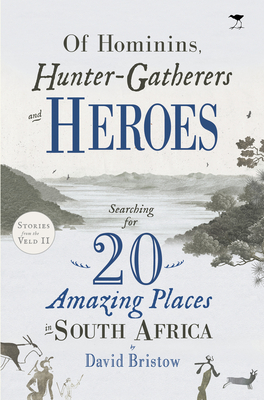 
This title is likely unavailable. Email or call for price and availability.
Of Hominins, Hunter-Gatherers and Heroes offers spellbinding stories of some amazing, little-known places in South Africa. Who knew that on the West Coast, just an hour’s drive from Cape Town, is one of only three places on earth where you can see the fossils of creatures that lived in antediluvian times and died right where you see them now? Or that all Bushman art, whether painted or engraved, is a conversation with the spirit world? Bristow ventured to some lesser-known places such as the West Coast Fossil Park, Mapungubwe, Hogsback, Lambazi Bay, Port Grosvenor, and Nieu Bethesda, as well as some old favourites, like the Garden Route, Kruger National Park, Cape Point, and the Johannesburg war museum, which each get a new treatment here. Written in the same engaging style as as his last successful book, The Game Ranger, the Knife, the Lion and the Sheep in the Stories from the Veld series, Of Hominins, Hunter-Gatherers and Heroes is a journey through a bucket list of must-see places in this “world in one country.” These stories will excite, entertain, and enthrall you.
David Bristow is a travel journalist, environmental scientist, storyteller, and specialist tour guide. He started exploring southern Africa in his early teens, and the journey continues. David has a BJourn (hons) from Rhodes University in Grahamstown, and an MA in environmental sciences from the University of Cape Town. David was born and bred in South Africa and has covered Africa and other parts of the world for the past 20-odd years as a travel and nature writer and a photographer. For 13 years he was the editor of Africa’s top-selling travel magazine Getaway. David has authored more than 20 books on South and southern African natural history, but now he turns his talents to history and cultural heritage with the series Stories from the Veld.