The Beatles Discography: Volume One - The 60's (Paperback) 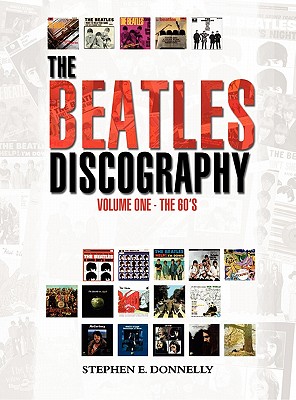 The Beatles Discography: Volume One - The 60's (Paperback)


Available in Warehouse. Wait for Email Confirmation for ETA
This book cannot be returned, cancelled, or exchanged. Please call for availability and pricing
THE BEATLES DISCOGRAPHY Presents The Beatles Recorded Legacy Like Never Before The Beatles Discography has their US and UK releases side by side with important releases from Germany, France and more plus their solo releases in the same chronological listing, complete with release dates, record labels & numbers, full track listings with composer & producer credits, recording dates, mix variations and song lengths, all in a compact and easy to understand format with many rare images of front & back covers, picture sleeves and record labels. Volume One The 60's covers the period between January 1st, 1961 through December 31st, 1970, from their first recordings with Tony Sheridan and EMI to their final original album Let It Be and the first releases of John, Paul, George and Ringo as solo artists. Section One is a chronological listing with hundreds of full-color images of the LPs, EPs and singles, packed with information about each release including title, release date, producer and more. Section Two is a chronological listing of songs by the date of completion with a complete history of appearances on disc and all related information including mix variations, composers, lengths and more. THE BEATLES DISCOGRAPHY, Volume One The 60's is the ultimate guide to the recorded works of the greatest band in history and an essential part of every Beatles fan's library.