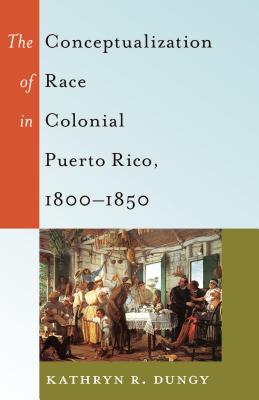 This is book number 47 in the Black Studies and Critical Thinking series.

With the growing interest in the history of peoples of African descent in the Americas, narratives addressing regions outside of the United States are becoming increasingly popular. The Conceptualization of Race in Colonial Puerto Rico, 1800-1850 illuminates the role people of African descent played in the building of a Spanish Caribbean society during the social upheaval of the early nineteenth century. This examination of cultural tensions created by changing regional and national definitions and the fluidity of identity within these structures will appeal to those interested in colonial race issues, Africans in the Americas, and gender and race stratification. Kathryn R. Dungy uses gender, color, and class differences as lenses to understand a colonial society that was regulated by social relationships within Puerto Rico, the Caribbean, and the Americas. By examining slave and free status, color, gender, work, and immigration, she endeavors to stimulate current debate on issues of gender, color, nation, and empire, utilizing a unique population and culture in the Black Atlantic.
Kathryn R. Dungy is Assistant Professor of Caribbean and Latin American History at Saint Michael's College in Colchester, Vermont.