Getting Stoned with Savages: A Trip Throught the Islands of Figi and Vanuatu (MP3 CD) 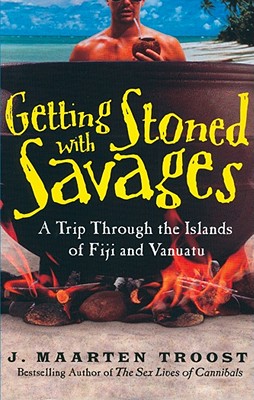 Getting Stoned with Savages: A Trip Throught the Islands of Figi and Vanuatu (MP3 CD)


This title is likely unavailable. Email or call for price and availability.
Getting Stoned with Savages again reveals Troost's wry wit and infectious joy of discovery in a hilarious account of life in the farthest reaches of the world. After two grueling years on the island of Tarawa, Troost was in no hurry to return to the South Pacific--until he began to feel remarkably out of place in modern America--and he knew it was time to set off for parts unknown. Here he tells the story of his time on Vanuatu, a cluster of islands where he struggles against typhoons, earthquakes, and giant centipedes but finds himself swept up in the laid-back, clothing-optional lifestyle of the islanders. When his wife Sylvia gets pregnant, they decamp for slightly more civilized Fiji, a fallen paradise rife with prostitutes and government coups, where their son takes quite naturally to island living.