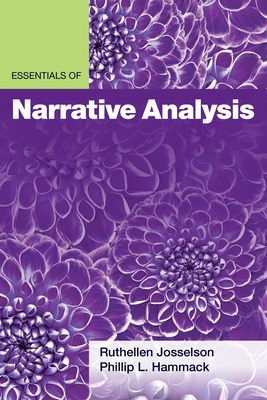 
Available in Warehouse. Wait for Email Confirmation for ETA
The brief, practical texts in the Essentials of Qualitative Methods series introduce social science and psychology researchers to key approaches to qualitative methods, offering exciting opportunities to gather in-depth qualitative data and to develop rich and useful findings. In this book, Ruthellen Josselson and Phillip L. Hammack introduce readers to Narrative Analysis, a qualitative method that investigates how people make meaning of their lives and experiences in both social and cultural contexts. This method offers researchers a window into how individuals' stories are shaped by the categories they inhabit, such as gender, race, class, and sexual identity, and it preserves the voice of the individual through a close textual analysis of their storytelling. About the Essentials of Qualitative Methods book series: Even for experienced researchers, selecting and correctly applying the right method can be challenging. In this groundbreaking series, leading experts in qualitative methods provide clear, crisp, and comprehensive descriptions of their approach, including its methodological integrity, and its benefits and limitations. Each book includes numerous examples to enable readers to quickly and thoroughly grasp how to leverage these valuable methods.
Ruthellen Josselson, PhD, is a professor of clinical psychology at Fielding Graduate University, Santa Barbara, California. She was formerly a professor at The Hebrew University of Jerusalem, a visiting professor at Harvard Graduate School of Education, and a visiting fellow at Cambridge University. She is a cofounder of the Society for Qualitative Inquiry in Psychology and editor of the American Psychological Association (APA) journal Qualitative Psychology. She received the Henry A. Murray Award and the Theodore R. Sarbin Award from APA and the Distinguished Contributions to Qualitative Inquiry Award from APA Division 5 (Quantitative and Qualitative Methods). On the basis of interviews she has conducted over 35 years, she has written three books exploring women's identity longitudinally: Finding Herself, Revising Herself, and most recently, Paths to Fulfillment: Women's Search for Meaning and Identity. Many of her other books (The Space Between Us, Best Friends, Playing Pygmalion) are based on interviews, and she has authored many journal articles and book chapters that explore the theory and practice of qualitative inquiry. Recently, she authored Interviewing for Qualitative Inquiry: A Relational Approach. She has conducted workshops on qualitative inquiry in France, Norway, Finland, Israel, and England, as well as in the United States. She was a member of the APA task force that produced the "Journal Article Reporting Standards for Qualitative Research." Phillip L. Hammack, PhD, is a professor and chair of psychology and director of the Sexual and Gender Diversity Laboratory at the University of California, Santa Cruz. He was trained as an interdisciplinary social scientist in the Committee on Human Development at the University of Chicago, where he received his doctorate in 2006. Dr. Hammack has been a leader in the movement to promote narrative theory and methods and to legitimize qualitative inquiry in psychology. Among his widely cited work is the 2008 paper "Narrative and the Cultural Psychology of Identity," published in Personality and Social Psychology Review, and the 2011 book Narrative and the Politics of Identity, published by Oxford University Press. Dr. Hammack is also editor of The Oxford Handbook of Social Psychology and Social Justice (2018) and of the Oxford University Press Series on Sexuality, Identity, and Society. He is associate editor of Qualitative Psychology, the official journal of the Society for Qualitative Inquiry in Psychology. Dr. Hammack is the recipient of several early career awards and prestigious fellowships, including a William T. Grant Scholar Award and a fellowship from the Center for Advanced Study in the Behavioral Sciences at Stanford University. His current research focuses on gender, sexual, and intimate diversity, centering the use of narrative and other qualitative methods.