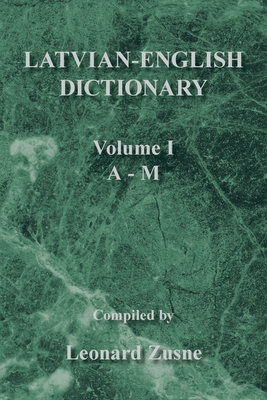 
Available in Warehouse. Wait for Email Confirmation for ETA
This book cannot be returned, cancelled, or exchanged. Please call for availability and pricing
A translating dictionary, like this one, is a practical dictionary that translates words in existing texts. It does not, as a rule, provide descriptions or explanations, nor does it set norms of how words should be spelled. The aim of dictionary users can be either to understand the source language (the language of the headwords) or to translate it into the target language(the language of the translation equivalents). The user's first language can be either the source language or the target language. This makes for four possible types of interlingual dictionaries (descriptive, prescriptive, or translating). Existing Latvian-English dictionaries indicate that they are intended for users whose first language is Latvian and whose purpose is to translate it into English. This dictionary is intended primarily for users whose first language is English and who wish to understand texts written in Latvian. This, of course, does not preclude Latvian speakers from using it to translate from Latvian into English, i.e., to produce English texts. English-speaking Latvians may, in fact, find it helpful for accurate and natural translation.