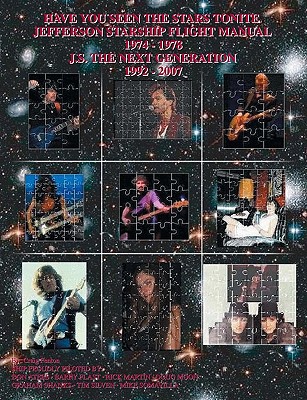 
Available in Warehouse. Wait for Email Confirmation for ETA
This book cannot be returned, cancelled, or exchanged. Please call for availability and pricing
"When it comes to the J.A./J.S. Craig Fenton is the source." Signe Anderson original J.A. member and part of the J.S. 93-94. Have You Seen The Stars Tonite contains 179 photos, the singles and albums the Jefferson Starship and J.S. The Next Generation released, a healthy dose of the solo projects, and the dates of service for members of the band past and present. There is much more. You can find documentation on the players that filled in for the regular members, special guests, and setlists either whole or at least partial for 703 concerts. There is no reason to stop there. The first time a song appeared, alternate versions, excerpts, poem titles, and a year-by-year breakdown of the tunes performed are all included in the flight manual. Finally, you can see which Jefferson Airplane titles were performed, an entire list of documented songs played 1974-1978 and 1992-2007 as well as an extensive listing of many of the cover tunes performed and the artists that made them famous.
Craig Fenton is an author, historian, public speaker, and radio personality specializing in 1960's and 1970's music. For two decades he was a radio disc-jockey, frequent public speaker, and host for station events. He has archived music for a multitude of bands for over 30 years including Jefferson Airplane. Fenton along with former Grateful Dead member Tom Constanten, and legendary rock and roll photographer Don Aters frequently lecture. His Jefferson Airplane book Take Me To A Circus Tent (The Jefferson Airplane Flight Manual) was published in November 2006 (Infinity Publishing). Founding member Marty Balin is quoted on the back cover "Craig Fenton knows so much about Jefferson Airplane and family, I was asking him the questions." During the creative process of the book Fenton interviewed thirty-two individuals from the San Francisco music scene including Jefferson Airplane members and personnel from the spin-off bands, as well as their contemporaries. Take Me To A Circus Tent has received superlative reviews from both professional critics and fans of the San Francisco sound. Herb Greene, the photographer who was awarded the cover shot for Jefferson Airplane's second album Surrealistic Pillow, contributes many photos Jefferson Airplane and the Great Society that have not previously been in printed form. Fenton hosts a weekly Podcast of Jefferson Airplane and related material he refers to as an "Aircast" and writes a daily blog as well.