Before Identity: The Question of Method in Japan Studies (Paperback) 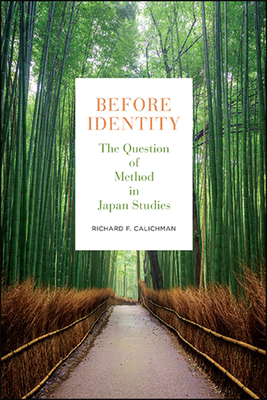 Before Identity: The Question of Method in Japan Studies (Paperback)


Available in Warehouse. Wait for Email Confirmation for ETA
This book cannot be returned, cancelled, or exchanged. Please call for availability and pricing
Before Identity represents the first attempt to provide a comprehensive examination of the methodological ground of Japan studies. At its most basic level, the field presupposes the immediate empirical existence of an entity known as the Japanese people or Japanese culture, from which it then carves out its various objects of inquiry. Richard F. Calichman attempts to show that this presupposition is itself ineluctably bound up with modern forms of knowledge formation, thereby enlarging the scope of what is meant by modernity. In this way, he aims to bring about a heightened level of theoretical-critical vigilance in the field.

Calichman explores the methodological commitments implied or expressed in the work of a range of writers and scholars--Murakami Haruki, Komori Yōichi, Harry Harootunian, Tomi Suzuki, Alan Tansman, and Dennis Washburn--and how such commitments have shaped and limited the field. If theoretical issues in Japan studies are not subjected to this sort of in-depth scrutiny, Calichman argues, then the field will continue to remain ghettoized relative to other disciplines in the humanities and social sciences, which have typically been more receptive to conceptual discourse. By showing that scholarly inquiry must begin not at the level of the object but rather at the more fundamental level of methodology, Calichman aims to introduce a greater degree of theoretical rigor to the discipline of Japan studies as a whole.
Richard F. Calichman is Professor of Japan Studies at the City College of New York, City University of New York. He is the author, translator, and editor of several books, including Contemporary Japanese Thought.