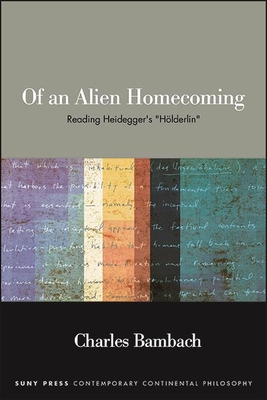 
Available in Warehouse. Wait for Email Confirmation for ETA
This book cannot be returned, cancelled, or exchanged. Please call for availability and pricing
Few themes resonate as powerfully in Heidegger as those connected to homecoming, homeland, and Heimat. This emphasis plays out most powerfully in Heidegger's reading of H lderlin and his turn towards language, art, and poetizing as a way of thinking through the poet's relevance in the epoch of homelessness and the abandonment of the gods. As the first book-length study in English of the Heidegger-H lderlin relation, Of an Alien Homecoming addresses the tension within Heidegger's work between his disastrous political commitments during the era of National Socialism and his attempts to open a path to a German future nurtured on H lderlin's ideal of poetic dwelling. Charles Bambach reads this work on H lderlin from 1934-1948 in conversation with the Black Notebooks and Heidegger's metapolitics, even as he uncovers an ethical dimension within Heidegger that pervades his reading of poetry. Throughout all of these various stages on Heidegger's thought path, H lderlin remains the poet who poetizes the possibility of finding our lost home amidst the homelessness brought about in the epoch of technological thinking.