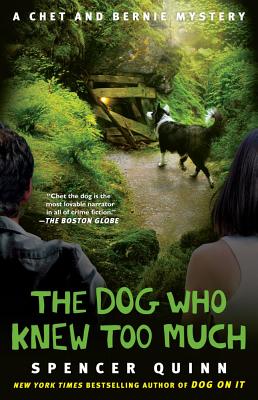 This is book number 4 in the The Chet and Bernie Mystery Series series.

Humor and intrigue combine for a “thoroughly entertaining comic mystery” (Booklist) as Spencer Quinn’s engaging and unlikely team of crime solvers takes on the case of a boy gone missing from a wilderness camp.

The kid’s mother thinks her ex-husband snatched their son, but Chet’s always reliable nose leads Bernie in a new and dangerous direction. Meanwhile, matters at home get complicated when a stray puppy that looks suspiciously like Chet shows up. Affairs of the heart collide with a job that’s never been tougher, requiring our intrepid sleuths to trust each other even when circumstances—and a rival P.I.—conspire to keep them far apart.
Spencer Quinn is the bestselling author of eight Chet and Bernie mystery series, as well as the #1 New York Times bestselling Bowser and Birdie series for middle-grade readers. He lives on Cape Cod with his wife Diana—and dogs Audrey and Pearl. Keep up with him by visiting SpenceQuinn.com.