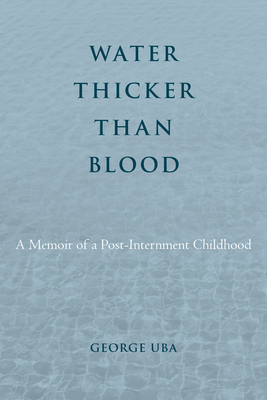 “I thought my life began in Chicago. I was mistaken. That is where my body first made its appearance, but the contours of my life…had their start much sooner.”

In Water Thicker Than Blood, poet and professor George Uba traces his life as a Japanese American born in the late 1940s, a period of insidious anti-Japanese racism. His beautiful, impressionist memoir chronicles how he, like many Sansei (and Nisei) across the United States, grappled with dislocation and trauma while seeking acceptance and belonging.

Uba’s personal account of his efforts to achieve normality and assuage guilt unfolds as racial demographics in America are shifting. He struggled with inherently violent midcentury educational and childrearing practices and a family health crisis, along with bullying. Uba describes boy scouts and yogore (community rebels and castoffs) with vivid detail, using these vignettes to show how margins were blurred and how both sets of youth experienced injury through the same ideological pressures.

Water Thicker Than Blood is not a conventional story about recovery or family reconciliation. But itoffers an intimate look at the lasting—in some ways irreversible—damage caused by post-internment ideologies of “being accepted” and “fitting in inconspicuously.” It speaks volumes for the greater Sansei post-internment experience.