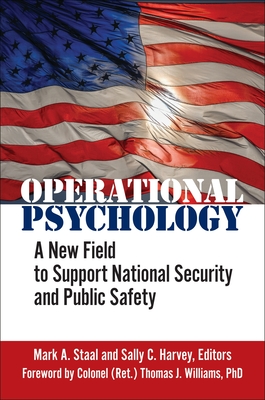 In this age of asymmetric warfare, increasing home-grown terrorism, and continuing threats from abroad, a new specialty has emerged and expanded--operational psychology.

Operational psychology plays a unique role in supporting issues of national security, national defense, and public safety. In this book, authors Mark A. Staal and Sally C. Harvey, both operational psychologists and retired military colonels, lead a team of experts explaining the field, its many roles, and how it is expanding. Topics include its application in intelligence, counterintelligence, and counterterrorism activities, consultation in high-risk training, criminal investigations including those of internet crimes against children, threat assessment, interrogations, aviation, personnel selection, and leadership development.

The text addresses the ethical questions and controversies that surround some of these roles, such as those associated with interrogation techniques. It also describes the role of operational psychologists in activities ranging from assessing and training people for maximum resiliency and hardiness to profiling people and groups of concern in national security investigations.