Who Is AC? (Paperback) 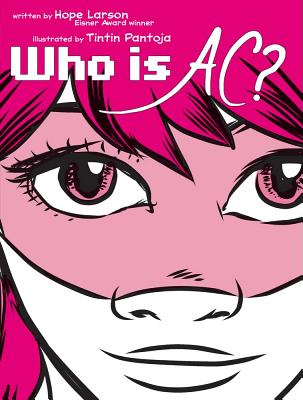 Who Is AC? (Paperback)


This title is likely unavailable. Email or call for price and availability.
In this breakthrough graphic novel from the award-winning author of Mercury, there’s a new superhero in town—and she’s got kick-butt cyberpowers.

Meet Lin, a formerly average teenage girl whose cell phone zaps her with magical powers. But just as superpowers can travel through the ether, so can evil. As Lin starts to get a handle on her new abilities (while still observing her curfew!), she realizes she has to go head-to-head with a nefarious villain who spreads his influence through binary code. And as if that weren’t enough, a teen blogger has dubbed her an “anonymous coward!” Can Lin detect the cyber-criminal’s vulnerability, save the day, and restore her reputation?

With ingenious scripting from graphic novel phenom Hope Larson and striking art from manga illustrator Tintin Pantoja, this action-packed story brims with magical realism and girl-power goodness.
Hope Larson is the author of Who Is AC? and the author-illustrator of Mercury, Chiggers, Gray Horses, and Salamander Dream, which Publishers Weekly named one of 2005's best comics. She won a 2007 Eisner Award, the highest honor for a comic artist. She lives with her husband in Los Angeles. You can visit her at HopeLarson.com.

Tintin Pantoja graduated from the School of Visual Arts in 2005 with a BFA in Illustration/Cartooning. Past works include Hamlet: The Manga Edition and three volumes of Graphic Universe’s Manga Math series. She currently resides in the Philippines. Visit her at TintinPantoja.com.
“Known for graphic novels steeped in magic realism, author Larson (Chiggers, 2008; Mercury, 2009) now adds the superhero genre to her repertoire of coming-of-age stories…. Clever plotting and Pantoja’s expressive, manga-influenced artwork help to pull the reader through the intertwining stories, setting up a strong introduction to what will surely become a series. Fans of Naoko Takeuchi’s Sailor Moon will find a lot to like here, and the added technological twist adds a freshness to the subgenre.”
— Booklist, March 1, 2013

“Lin, a zine-writing 15-year-old who’s just moved to a small town, becomes an unwitting Sailor Moon–style superhero, activated by mysterious cellphone messages and visited by a “dispatcher” who nags her until she suits up…. Boasting a high proportion of strong, independent girl characters, this book is suitable even for younger readers."
— Publishers Weekly, February 2013

"This origin story of an unlikely teen superhero will have readers begging for more…. Larson gets a lot right with this story: Lin is an enormously likable protagonist, and both her unhappiness and her literary aspirations are easy to understand and relate to. Secondary characters—in particular Lin’s family—are satisfyingly complex. Pantoja’s black-and-white panels take on purple accents with the introduction of fantasy elements; their muscular lines ably complement Larson’s characterizations.”
— Kirkus Reviews, March 2013

"A sharply-written and energetically-drawn new take on the magical girl genre, Larson and Pantoja are a match made in YA heaven."
— Vera Brosgol, Eisner Award-winning creator of Anya's Ghost

“Lin is a relatably imperfect heroine, who thinks she knows about heroes until she is faced with being one…. Overall, readers who like their novels with as many questions as answers will revel in this unique, challenging take on the superhero graphic novel.”
— The Bulletin of the Center for Children’s Books, June 2013

"This contemporary superhero story is a departure for Larson, who has previously done a graphic adaptation of A Wrinkle in Time (Farrar, 2012) as well as stories of magical realism…. Main characters are well developed with clear motives. Segues between scenes have a cinematic feel and effectively move the story forward. Pantoja’s heavy black-line drawings, large eyes, and angled action panels give the art a mangalike appearance."
— School Library Journal, August 2013