Cybersemiotics: Why Information Is Not Enough (Toronto Studies in Semiotics and Communication) (Paperback) 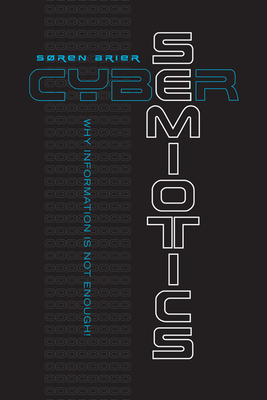 Cybersemiotics: Why Information Is Not Enough (Toronto Studies in Semiotics and Communication) (Paperback)

A growing field of inquiry, biosemiotics is a theory of cognition and communication that unites the living and the cultural world. What is missing from this theory, however, is the unification of the information and computational realms of the non-living natural and technical world. Cybersemiotics provides such a framework.

By integrating cybernetic information theory into the unique semiotic framework of C.S. Peirce, S ren Brier attempts to find a unified conceptual framework that encompasses the complex area of information, cognition, and communication science. This integration is performed through Niklas Luhmann's autopoietic systems theory of social communication. The link between cybernetics and semiotics is, further, an ethological and evolutionary theory of embodiment combined with Lakoff and Johnson's 'philosophy in the flesh.' This demands the development of a transdisciplinary philosophy of knowledge as much common sense as it is cultured in the humanities and the sciences. Such an epistemological and ontological framework is also developed in this volume.

Cybersemiotics not only builds a bridge between science and culture, it provides a framework that encompasses them both. The cybersemiotic framework offers a platform for a new level of global dialogue between knowledge systems, including a view of science that does not compete with religion but offers the possibility for mutual and fruitful exchange.