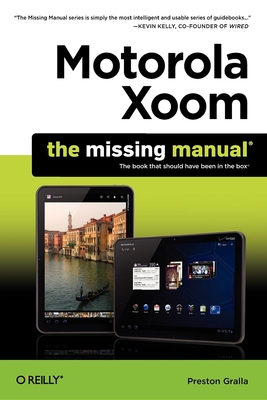 Motorola Xoom is the first tablet to rival the iPad, and no wonder with all of the great features packed into this device. But learning how to use everything can be tricky--and Xoom doesn't come with a printed guide. That's where this Missing Manual comes in. Gadget expert Preston Gralla helps you master your Xoom with step-by-step instructions and clear explanations. As with all Missing Manuals, this book offers refreshing, jargon-free prose and informative illustrations.

Preston Gralla is the author of more than 40 books that have been translated into 20 languages, including Galaxy S 5 The Missing Manual, Windows 8 Hacks, NOOK HD: The Missing Manual, Galaxy Tab: The Missing Manual, The Big Book of Windows Hacks, How the Internet Works, and How Wireless Works. He is a contributing editor to Computerworld, a blogger for ITWorld, and was a founding editor and then editorial director of PC/Computing, executive editor for CNet/ZDNet, and the founding managing editor of PC Week.He has written about technology for many national newspapers and magazines, including USA Today, Los Angeles Times, Dallas Morning News (for whom he wrote a technology column), PC World, and numerous others. As a widely recognized technology expert, he has made many television and radio appearances, including on the CBS Early Show, MSNBC, ABC World News Now, and National Public Radio. Under his editorship, PC/Computing was a finalist for General Excellence in the National Magazine Awards. He has also won the "Best Feature in a Computing Publication" award from the Computer Press Association.Gralla is also the recipient of a Fiction Fellowship from the Massachusetts Cultural Council. He lives in Cambridge, Massachusetts, with his wife (his two children have flown the coop). He welcomes feedback about his books by email at preston@gralla.com.