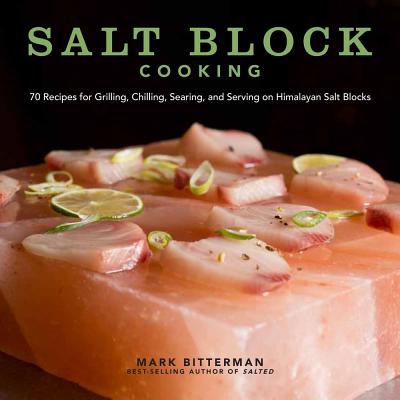 
Available in Warehouse. Wait for Email Confirmation for ETA
Guided only by a hunger for flavor and an obsession with the awesome power of salt, award-winning author Mark Bitterman pioneers uncharted culinary terrain with Salt Block Cooking, which provides simple, modern recipes that illustrate salt block grilling, baking, serving, and more.

This is the original, bestselling book that focuses on salt block cooking, with 70 recipes designed for using this unique cooking tool. Mark Bitterman is the foremost salt expert and one of the largest importers and retail distributors of Himalayan salt blocks. The precious pink mineral mined from ancient hills in Pakistan’s Punjab province has arrived on the American cooking scene as an exciting and enticing new form of cooking. Himalayan salt blocks are available at specialty retail stores around the world and the market is growing.

A precious mineral mined from ancient hills deep in Asia has stormed the American cooking scene. With crystals of rose, garnet, and ice, Himalayan salt blocks offer a vessel for preparing food as stunningly visual as it is staggeringly tasty.

Everyone who loves the excitement and pleasure of discovering new cooking techniques will enjoy this guide to cooking and entertaining with salt blocks. The introduction is your salt block owner’s manual, with everything you need to know to purchase, use, and maintain salt blocks with confidence. The chapters that follow divide seventy recipes into six techniques: serving, warming, curing, cooking, chilling, and of course, drinking. You’ll find recipes ranging from a minty watermelon and feta salad to salt-tinged walnut scones, beef fajitas served table-side, salt-cured candied strawberries, and salt-frozen Parmesan ice cream!

“Mark Bitterman knows more about salt than anyone else on the planet. If you’ve ever wondered what to do with those handsome slabs of Himalayan salt you see at cookware shops, Salt Block Cooking will inspire you with wildly innovative uses you’ve never dreamed of, from cocktails to candy, from curing to grilling, and from ceviche to pizza. Along the way, you’ll learn the half-billion-year history of the only food that starts as a rock.” ––Steven Raichlen, author of the Barbecue! Bible series and host of Primal Grill on PBS

“Cooking on salt blocks will blow your mind, jump-start your creative process, make your food taste better, delight your friends, and cut down on the time you spend cleaning pots and pans. And what better guide for your new experience than Mark Bitterman, a man who has forgotten more about salt cookery than I will ever learn.” ––Andrew Zimmern, host of Bizarre Foods with Andrew Zimmern on the Travel Channel

“Salt Block Cooking is an essential guide to working with salt blocks. It opens readers’ eyes to possibilities never imagined before and gives a unique perspective on a completely new and interactive way to cook. Mr. Bitterman has changed the way I cook every day. He made me understand that salt is the most essential part of the seasoning process and is just as important as the ingredient itself. I encourage you to follow Mr. Bitterman’s lead and I promise you will never think about salt in the same way again.” ––Vitaly Paley, chef/owner of Paley's Place Bistro and Bar, Imperial, and Portland Penny Diner; co-author of The Paley's Place Cookbook

Mark Bitterman is the author of the James Beard Award-winning book, Salted. He is the leading expert in culinary salt, and has led the charge into the culinary adventure of cooking on salt blocks.  As owner of the speciality store, The Meadow, with locations in Portland, OR and New York City, he is one of the largest importers, retailers, and wholesale distributors of salt blocks. He lectures at culinary schools such as the French Culinary Institute, the Institute of Culinary Education, and Le Cordon Bleu and has been recognized as a Local Food Hero by Cooking Light, and a Tastemaker by Food & Wine. He has been featured in the New York Times, The Atlantic, O magazine, GC, Rachael Ray, Wine Spectator, and on The Splendid Table, All Things Considered, CBS News, ABC News, Fox News, MSNBC, CNN and more.


Andrew Schloss, who frequently develops recipes for The Meadow’s various communications and activities, contributes his expertise to the development of the recipes for the book. Schloss is the author of sixteen cookbooks including: Mastering the Grill (a New York Times best-seller) and The Science of Good Food (winner of an IACP Cookbook Award, a James Beard finalist, nominated by Le Cordon Bleu Food Media Awards as Best Food Book in the World), both co-authored with David Joachim. His latest books are Fire it Up (also with Joachim) and Homemade Sodas. He is the culinary force behind Cookulus, the first interactive cookbook app.
Q:--Barbara Goldberg "Is the idea of cooking and serving on salt blocks new?"

A:--Mark Bitterman "It's less than a decade old. Its discovery is a little shrouded in mystery. I think there was some opportunistic cooking maybe on salt stones in ages past. But in terms of salt-block cooking the way we think of it now, all evidence I have is that it's an American invention."

(This article can be found on Reuters and Yahoo News! 07/23/14) (Barbara Goldberg, Chicago Tribune)

"The salt expert gives lessons on cooking with salt bricks, which adds a sublte saltiness and can get hot enough on a grill to sear steak." (Food & Wine)

"If the subject of salt is intriguing to you, as it is to me, here are some books available on the subject: Mark Bittman. Salted: A Manifesto on the World's Most Essential Mineral. And also Salt Block Cooking: 70 Recipes for Grilling, Chilling, Searing and Serving on Himalayan Salt Blocks. Bittman is an expert on salt and tells the tale beautifully." (Lou Jane Temple, Kansas City Star)

"SALT BLOCK COOKING follows up on the author's prior 2010 introduction to the concept in SALTED and provides a powerful account on how to use Himalayan salt blocks for grilling, baking, and cooking.  Some seventy recipes are used to display all the basics of using salt blocks to maximum advantage , and include everything you need to know about the process, from shopping for a block and maintaining one to healing, cooling and serving all kinds of foods.  A 'must' for any cookbook collection looking for the basics on salt block use" (James A. Cox, Midwest Book Review)

"Good read. Salt Block Cooking by Mark Bitterman is the home cook's guide to a technique once only practiced by top chefs. Himalayan salt blocks are sold at specialty retail stores around the world, including The Spice & Tea Exchange, 309 N. Park Ave. in Winter Park.

This book is the first to address salt-block cooking and includes 70 recipes designed for this reusable cooking tool. The process involves heating the blocks and cooking meat or seafood directly on the surface. When not used for food preparation, the blocks make nifty serving platters for cold and room-temperature items.

Bitterman is an expert on culinary salt, chocolate and cocktail bitters. He won a James Beard Award for his first book, Salted." (Heather McPherson, Orlando Sentinel)