Unicorn Crossing: Another Phoebe and Her Unicorn Adventure (Paperback) 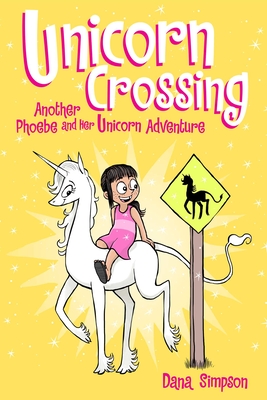 Unicorn Crossing: Another Phoebe and Her Unicorn Adventure (Paperback)

This is book number 5 in the Phoebe and Her Unicorn series.

Phoebe and Marigold are back for a fifth installment of the award-winning series. Join in on their latest adventures—and experiments—in being themselves!

Although the journey of growing up can sometimes be difficult, along the way Phoebe and Marigold discover something more enduring than goblin fads, unicorn spa vacations, and even a Spell of Forgetting—their one of a kind friendship.
Dana Claire Simpson grew up in Gig Harbor, Washington, drawing the entire time. She eventually graduated from The Evergreen State College, despite having spent all her time drawing, and not always for credit.

From 1998 to 2008, she drew the internet comic strip Ozy and Millie. After winning the Amazon-sponsored Comic Strip Superstar Contest in 2009, Andrews McMeel Syndication signed her to a development deal for Heavenly Nostrils, which was later renamed Phoebe and Her Unicorn.

She currently lives in Santa Barbara, California, with her tech genius spouse and her fairly stupid cat.