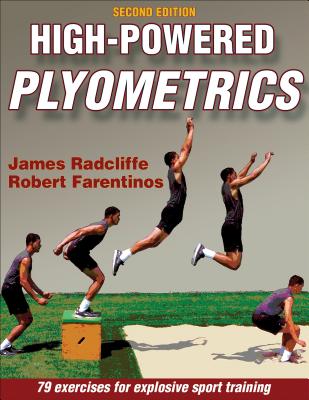 Improve strength, power, speed, and more! No matter what sport you play or level you compete, High-Powered Plyometrics will take your performance to the next level.

High-Powered Plyometrics is a systematic guide to explosive power training for athletes, coaches, and strength and conditioning experts. Exploring the principles of high-intensity plyometric training, power assessments, and development of long- and short-term conditioning programs, this hands-on guide covers it all.

You’ll find detailed photo sequences, step-by-step instruction, and intensity guidelines to ensure correct technique for 79 exercises that increase power in the core and upper and lower body. Incorporate exercises into an existing program, or personalize one of the ready-to-use programs for 21 sports, including football, basketball, track and field, volleyball, and wrestling. You’ll also learn to track progress and adjust your programming to maintain your results.

The most dynamic and complex exercises found in the book are housed in an all-new online video library. Via streaming video, you have exclusive access to demonstrations of dozens of exercises and drills to ensure you perform them with proper technique.

Go beyond basic conditioning and develop the explosive power that will give you an edge on the competition.

Jim Radcliffe is one of the most overlooked elements in the success of Oregon’s student-athletes. Now in his third decade as the school’s head strength and conditioning coach, he not only plays a significant role in the Ducks football program as the designer of the year-round conditioning calendar, but he also has been quick to aid in the athletic development of athletes in all sports in his work with Olympians and World Championship medalists.

Radcliffe has guided football, basketball, track and field, baseball, and volleyball athletes during much of his career. He furnishes the student-athletes with a variety of exercise through weight training and lifting systems and is a noted authority on exercises dealing with the improvement of speed and quickness. He became assistant strength coach at Oregon in 1985, a position he held for two years before assuming the duties of head coach in that area.

Radcliffe taught and coached a variety of sports and was the athletic trainer at Aloha High School from 1978 to 1983. He then did graduate studies at Colorado and worked in private business before joining the Ducks staff. Graduating from Pacific in Oregon with a degree in physical education and health in 1980, he played four seasons as defensive back and was captain of the special teams. Radcliffe earned his master’s degree in biomechanics from Oregon.

Active in national organizations surrounding his profession, Radcliffe has been certified by USA Weightlifting, CSCCa, and the NSCA. He also has written books, been published in numerous professional journals, and produced videos on plyometrics.

Bob Farentinos is a fitness professional and lifelong athlete. He has competed in weightlifting, cross-country skiing, and rowing and has won national titles and masters championships in all three sports. Farentinos earned his PhD in biology from the University of Colorado and spent many years as a professor and researcher at various universities, including Colorado, Michigan, Ohio State, and Johns Hopkins. He has published extensively in scientific journals and has written wildlife stories for children as well as numerous lay articles on exercise, health, and fitness.

In the 1980s, Farentinos owned and managed a sport and fitness center in Boulder, Colorado, designated as an official training facility for the U.S. ski team. At the center he trained and coached Olympic and professional athletes in cycling, running, triathlon, Nordic and alpine skiing, weightlifting, climbing, and mountaineering. During that time he also worked with athletes and coaches at the U.S. Olympic Training Center in Colorado Springs.

From 1984 through 1991, he competed in the United States Ski Association (USSA) Great American Ski Chase, a national series of 50-kilometer cross-country races, winning several age-class championships. He participated in the 1988 Winter Olympics in Calgary as a technical representative for one of his ski equipment sponsors.

Farentinos began his rowing career in 2003 at the age of 62. Within a few years he was rowing competitively, winning gold and silver medals in Northwest Regional Masters Championships in single sculling. In 2007 he won the Canadian National Masters Championship and has competed successfully since then in national and regional regattas and head races in single and double sculling.

Farentinos volunteers hiis time and expertise designing workout facilities and exercise programs for youth dealing with substance abuse and addiction. He uses exercise and sport to redirect their focus toward healthier and more productive lifestyles.

“In front of you is a locked door that reads ‘Athleticism.’ How fortunate you are that Coach Radcliffe gives you the key to this door in the new edition of High-Powered Plyometrics.”

“Coach Radcliffe is the finest strength and conditioning coach in the world. His knowledge and passion for making athletes stronger and faster are unparalleled.”

“Jim Radcliffe is the secret weapon behind the success of all of the sports at the University of Oregon, and his High-Powered Plyometrics is a must-have for all coaches and athletes! Radcliffe translates explosive power to sports better than any coach out there.”