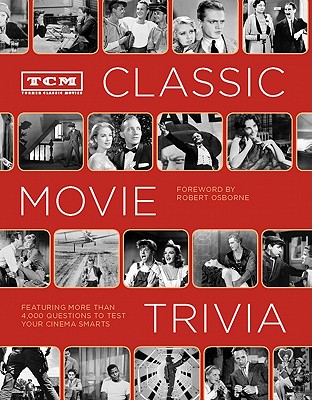 By Turner Classic Movies (Foreword by)


This title is likely unavailable. Email or call for price and availability.
This is the definitive movie trivia book, from the authority on classic film. Rediscover your favorite films and put your movie knowledge to the test with more than 4,000 questions that draw on a century of landmark cinema. Questions range from early Hollywood to the 1960s and beyond, including key genres, stars, directors, behind-the-scenes facts, famous quotes, and more all highlighted by spotlight trivia features and hundreds of images and film stills. A foreword by TCM host Robert Osborne and a challenging Experts Only section round out this ultimate volume for classic film aficionados.
Robert Osborne is the primetime host and anchor of Turner Classic Movies and a columnist-critic for the Hollywood Reporter.

Turner Classic Movies is the definitive resource for classic films and is available on cable and satellite systems worldwide.
"A fantastic gift for those who grew up watching or appreciates classic films; particularly grandparents, parents and film buff friends." -The Daily Blam!