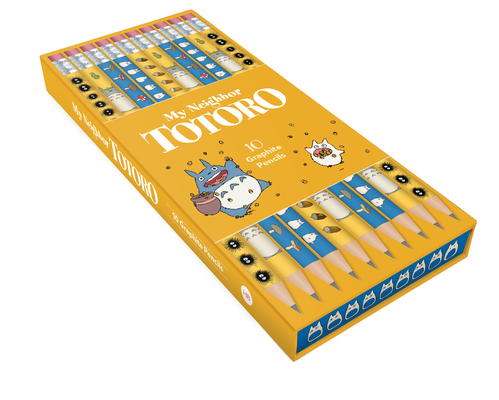 By Studio Ghibli (Photographs by)


On Our Shelves as of 9am Today
Sketch and write with Totoro and friends!

Celebrated for being one of the best hand-drawn films in the history of animation, My Neighbor Totoro is a true inspiration. Let Totoro and friends spark your imagination with this handy set of 10 graphite pencils featuring beloved icons from the animated classic.

• The Standard HB/No. 2 pencils offer great writing quality, while the full-color characters printed on them will delight adults and children alike.
• An easy way to add fun and cuteness to your office supplies or school supplies
• Makes a great gift for Studio Ghibli and animation fans; collectors; artists; and anyone who owns other My Neighbor Totoro products or loves cute Japanese art, stationery, and pop culture

My Neighbor Totoro © 1988 Studio Ghibli
Studio Ghibli is a Tokyo-based animation film studio founded in 1985 by directors Isao Takahata and Hayao Miyazaki. The studio has produced more than 20 feature-length films, many of which have garnered numerous awards and critical acclaim, including My Neighbor Totoro, Kiki's Delivery Service, Princess Mononoke, and the Academy Award–winning Spirited Away. Their last four films—The Wind Rises, The Tale of the Princess Kaguya, When Marnie Was There, and The Red Turtle—were all nominated for Academy Awards for Best Animated Feature Film.