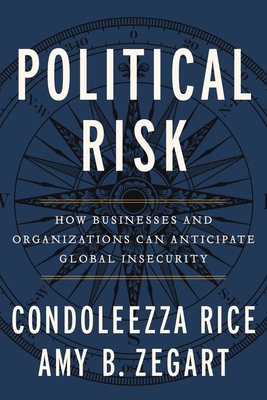 
Available in Warehouse. Wait for Email Confirmation for ETA
From New York Times bestselling author and former U.S. secretary of state Condoleezza Rice and Stanford University professor Amy B. Zegart comes an examination of the rapidly evolving state of political risk, and how to navigate it.

The world is changing fast. Political risk-the probability that a political action could significantly impact a company's business-is affecting more businesses in more ways than ever before. A generation ago, political risk mostly involved a handful of industries dealing with governments in a few frontier markets. Today, political risk stems from a widening array of actors, including Twitter users, local officials, activists, terrorists, hackers, and more. The very institutions and laws that were supposed to reduce business uncertainty and risk are often having the opposite effect. In today's globalized world, there are no "safe" bets.

POLITICAL RISK investigates and analyzes this evolving landscape, what businesses can do to navigate it, and what all of us can learn about how to better understand and grapple with these rapidly changing global political dynamics. Drawing on lessons from the successes and failures of companies across multiple industries as well as examples from aircraft carrier operations, NASA missions, and other unusual places, POLITICAL RISK offers a first-of-its-kind framework that can be deployed in any organization, from startups to Fortune 500 companies.

Organizations that take a serious, systematic approach to political risk management are likely to be surprised less often and recover better. Companies that don't get these basics right are more likely to get blindsided.

Condoleezza Rice is a professor of Political Economy in the Stanford Graduate School of Business and a professor of Political Science at Stanford University. From 2005-2009, Rice served as the 66th Secretary of State of the United States and also served as President George W. Bush's Assistant to the President for National Security Affairs from 2001-2005. Rice has authored and co-authored numerous books, including three bestsellers: Democracy: Stories from the Long Road to Freedom, No Higher Honor: A Memoir of My Years in Washington, and Extraordinary, Ordinary People: A Memoir of Family.

Amy Zegart is the Davies Family Senior Fellow at the Hoover Institution; Senior Fellow and Co-Director of Stanford University's Center for International Security and Cooperation; and professor of Political Science, by courtesy. She is the author of three books about U.S. intelligence challenges: Flawed by Design: The Evolution of the CIA, JCS, and NSC; Spying Blind: The CIA, the FBI, and the Origins of 9/11; and Eyes on Spies: Congress and the United States Intelligence Community.
"Rice and Zegart's POLITICAL RISK should be read by every business leader. Any company that fails to learn and apply the lessons of this wise and practical book can quickly find itself in rapid decline. But equally, those who become skilled at its application can do more than merely mitigate such risks; they can thrive upon them. Well-written and chock-full of compelling case stories wrapped inside a coherent conceptual framework, POLITICAL RISK gets and keeps your attention, page after page. We cannot predict the future, but -- with the help of this marvelous masterwork--- we can prepare for it."—Jim Collins, author of Good to Great and co-author of Great by Choice and Built to Last

"Secretary Rice and Dr. Zegart have melded their professional experiences of managing political risk at the highest levels with other case studies into a uniquely useful and profound book."—Frederick W. Smith, chairman & CEO, FedEx Corporation

"Political risk was once centered on honest-to-goodness political actors -- governments, central banks and the like. But as Rice and Zegart clearly show, technology has forever changed who counts as a 'political actor.' This book is truly excellent, both for tracing how far the political risk field has come in the last two decades, and how much further it has left to go."—Ian Bremmer, president, Eurasia Group

"Clearly written and timely, this book will interest not only current and future business executives but also would-be-whistle-blowers and corporate watchdogs."—Publishers Weekly