Leaping Ahead: Advances in Prosimian Biology (Developments in Primatology: Progress and Prospects) (Hardcover) 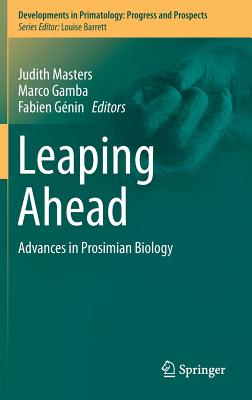 Leaping Ahead: Advances in Prosimian Biology (Developments in Primatology: Progress and Prospects) (Hardcover)


Available in Warehouse. Wait for Email Confirmation for ETA
Leaping Ahead: Advances in Prosimian Biology presents a summary of the state of prosimian biology as we move into the second decade of the 21st century. The book covers a wide range of topics, from assessments of diversity and evolutionary scenarios, through ecophysiology, cognition, behavioral and sensory ecology, to the conservation and survival prospects of this extraordinary and diverse group of mammals. The collection was inspired by an international conference in Ithala, KwaZulu-Natal, South Africa in 2007, where prosimian biologists gathered from Canada, Finland, France, Germany, India, Italy, Japan, Madagascar, South Africa, Tanzania, the United Kingdom, and the United States of America. The meeting reverberated with the passion prosimian researchers feel for their study subjects and with their deep concern for the future of prosimians in the face of ongoing habitat destruction and the burgeoning threat of bushmeat hunting. Chapters for this volume were contributed by researchers from across the globe; they attest to the diversity, vibrancy and rapid growth of prosimian biology, and to the intellectual advances that have revolutionized this field in recent years. Since its earliest beginnings, prosimian research and its resultant literature have had a strong francophone component, and researchers in many prosimian habitat countries are more comfortable reading and writing in French rather than English. French summaries of all chapters have been included. The volume is targeted at researchers, both those entering the field and established scientists, who have an interest in the biology of primates and small mammals. It is also aimed at conservation biologists seeking a deeper understanding of the faunas and conservation developments in Africa, Madagascar and Southeast Asia, and anyone who has an interest in discovering the true diversity of our order, the Primates.