Creating The Life You Desire: Using Hypnosis And The Power Of The Subconscious Mind To Change Your Life And Live Your Dreams. (Paperback) 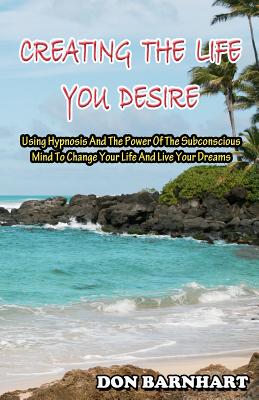 Creating The Life You Desire: Using Hypnosis And The Power Of The Subconscious Mind To Change Your Life And Live Your Dreams. (Paperback)


Available in Warehouse. Wait for Email Confirmation for ETA
This book cannot be returned, cancelled, or exchanged. Please call for availability and pricing
Creating The Life Your Desire will teach you the simple yet powerful techniques of how you can create the life you've longed for by taking control of your thoughts, patterns and habits at the inner subconscious level. By applying these formulas, you will soon find yourself living the life you've always dreamed of, achieving your goals with relative ease and breaking bad habits and negative thought patterns. The techniques you will learn in this book can guide you to higher level of both personal and professional satisfaction. I have used and studied the majority of healing arts; theology, meditation, yoga, hypnosis, NLP and read almost every self-help author from Tony Robbins, Chopra, Carnegie, Dyer and The Secret. The one thing they all have in common is tapping into the power of the subconscious mind. I have found that using a combination of these techniques while under hypnosis can fast track your results. My own personal journey led me to discover these techniques when I was a teenager and I have been using them ever since creating a life of my dreams and I continue to practice their techniques on a daily basis because they work. Don Barnhart.
Award-Winning Comedian, Second City Conservatory Alumni and Certified Hypnotherapist Don Barnhart is the author of books films and numerous sitcoms and an accomplished actor and director and is truly living the life of his dreams. He received the 2010 Bob Hope Award for his dedication to entertaining the troops around the world. He's been seen on almost every comedy show and is a regular favorite on The Bob & Tom Show and XM/Sirius Satellite Radio. Barnhart stars in the new documentary, Finding The Funny. The film follows a group of students taking his comedy class in Las Vegas and explores the long debated topic whether or not you can teach someone to be funny featuring interviews with Brad Garrett, Louie Anderson and many others. His latest novel, Freeloader is being turned into a feature film with Barnhart starring and directing the project. The film centers on a returning Veteran who ends up on the streets of Las Vegas and becomes the Robin Hood of the homeless. Barnhart is one of the most requested acts at the top comedy clubs and cruise ships around the world and has had his own show in Las Vegas. He is also the most sought after comedy coaches, consultants and motivational speakers working today. The Las Vegas Review lists Barnhart's show as one of their "Best Bets", The NY Times calls him, "Hilarious", The LA Times says, "One of the best" and Howard Stern said, "This guy's funny!"