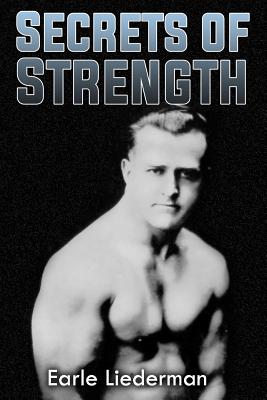 
Available in Warehouse. Wait for Email Confirmation for ETA
This book cannot be returned, cancelled, or exchanged. Please call for availability and pricing
"I might even say that great strength is possible for any young fellow unless he happens to be hopelessly crippled. Even those who are lacking in size, in vigor, or who suffer from minor diseases, can first overcome their weaknesses by the medium of corrective, developing and invigorating exercises; and then, after the bodies have become properly shaped and muscled, can acquire that great strength which is the crowning glory of true manhood. I have seen so many weaklings become 'Strong Men' that I have become convinced that the capability for possessing great strength is within all of us. And that any man, however weak, can become very strong if he has the ambition, the persistence and the knowledge. While I cannot give you the first two, I feel that I can help out on the information. I know 'Strong Men' of almost every conceivable size and shape; from big-boned, massive giants, down to little 'five-footers, ' who, though small-boned, are masses of muscle and energy. And, between those two extremes, men of all the intermediate stages of size, whose one common possession is that distinctive beauty of form and high degree of muscular development which marks the true 'Strong Man.' So, in conclusion, if you are one of that ever-growing army of strength-enthusiasts, I can assure you that physical power can be yours; but that the road to strength is easier, and can be traveled quicker if you avoid the stumbling blocks, and keep out of the ruts. Here is hoping that some of the information given in this book will make the road smoother for you." - Earle E. Liederman This is a 6" by 9" original version, restored and re-formatted edition of Liederman's 1925 classic. Visit our website and see our many books at PhysicalCultureBooks.com.
"Few athletes have had lives as filled with variety as Earle E. Liederman. He began as a vaudeville strongman and in the mid-1920s became the undisputed king of the mail-order musclemen. After that he turned to radio broadcasting and then to journalism. Finally, in the 1940s Liederman came to California and, because of his seductive descriptions of sun, sand and sea, helped draw hundreds of bodybuilders to the West Coast. Despite his many accomplishments, the details of Liederman's biography are difficult to pin down because he was so reluctant to recount his personal life. Not even his birthdate is known for certain. Apparently, he was born around 1886 in Brooklyn, New York, to poor Swedish immigrant parents, graduated from high school in Jamaica, New York, and pursued a degree in physical education at the state normal school. Soon after earning his diploma, he was hired by the New York Board of Education as a physical culture specialist. ... While Liederman was working for the Board of Education, he was also trying his hand as a boxer. It took him only a short time to determine that he had little talent for the ring, however, so he switched to wrestling, which also proved not to be his strong suit. He was saved from further embarrassment in this effort by a talent scout from a vaudeville chain, who convinced the young man to try his hand at a strongman act. This was more to Earle's taste, and in 1910 he quit his job and embarked on a career as a professional athlete. Liederman was a savv marketer, and he knew how to tap into the public's worries and insecurities. The copy in one typical ad from 1924 compared a tiny body to a wart on the nose--but with one difference. "If you had a wart on your nose, you would worry yourself sick--you would pay most any price to get rid of it. . . . Wake up! Come to your senses! Everyone despises the weakling." Worrisome thoughts like these kept more and more customers clamoring for the course, and before long his ads were appearing in several magazines at once, often in lavish six-page spreads. Earle raked in a great deal of money with the mail-order business. One visitor to his posh New York headquarters reported that there were 60 secretaries ... pounding out advice and encouragement to the many correspondents. ... He kept a fleet of fancy cars and lived the high life. At some point he married a former Miss Alaska beauty queen, and the two cut a glamorous swath through New York society". - David Chapman