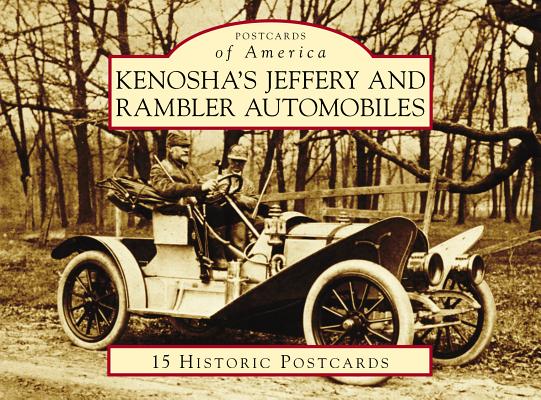 
This title is likely unavailable. Email or call for price and availability.
These mailable vintage-photograph postcards feature various early models of Jeffery and Rambler automobiles. The Thomas B. Jeffery Company existed as an automobile maker from 1902 to 1916 and in that short span created a corporate foundation that would lead to successor firms Nash Motors, Nash-Kelvinator, American Motors, and Jeep. Thomas Jeffery named his automobile the Rambler, after the popular bicycles he manufactured prior to his car venture. The Rambler was a car of outstanding quality and reliability. From its first showing in Chicago in 1902, the Rambler stood out as an unusual value for the money. That reputation carried over when Tom Jeffery's son and successor Charles decided to change the car's name to Jeffery in honor of his late father. In 1916, Charles Nash, then president of General Motors, resigned his position and purchased the Thomas B. Jeffery firm, renaming it the Nash Motors Company. Before long, an all-new Nash car was introduced, and the Jeffery brand faded away. Nash went on to become one of the largest of the American independent automakers.