Staten Island in the Nineteenth Century: From Boomtown to Forgotten Borough (Paperback) 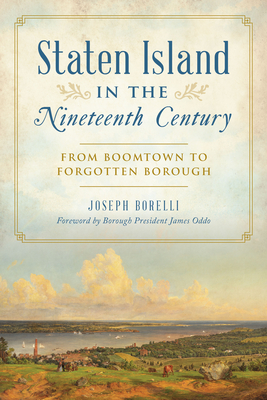 Staten Island in the Nineteenth Century: From Boomtown to Forgotten Borough (Paperback)


This title is likely unavailable. Email or call for price and availability.
Emerging from the Revolutionary War and the formation of a new nation, Staten Island was poised to enter the nineteenth century ripe for growth and prosperity. Fueled by waves of immigration, Richmond County became a boomtown of industry and transportation. Piloting his first ferry with just two small masts and eighteen-cent fares, Cornelius Vanderbilt built a transit empire from his native shores of Staten Island. When the Civil War erupted, Richmond played a key role in housing and training Union troops as 125 naval guns protected New York Harbor at the Narrows. At the close of the century, Staten Island was swept up in the politics of consolidation, with 84 percent of locals voting to join Greater New York, yet the promised benefits of a new mega-city never materialized. Author Joe Borelli charts the trials and triumphs of Staten Island in the nineteenth century.