The Gentleman's Guide to Passages South: The Thornless Path to Windward (Paperback) 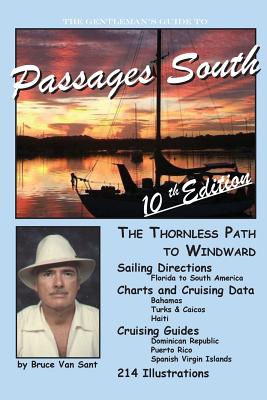 The Gentleman's Guide to Passages South: The Thornless Path to Windward (Paperback)

This is the Tenth and last Edition of the popular directions for sailing south to the Bahamas and the Caribbean.

For more than twenty years Van Sant repeatedly surveyed nearly 200 anchorages between Florida and South America. He racked up well over 80,000 sea miles doing it, mostly single-handed. Why? You'll find some interesting answers in his book of stories, Margarita Cat, but essentially, he did it because he liked doing it.

Sailing up and down the chain of islands so much and so often, he got to looking for shorter and easier ways to navigate between each link in the chain, and he kept refining detailed nav plans for every leg.

He has systematically taken the thorns out of the route they used to call the Thorny Path. For example, he exploits the calming effects on wind and sea which result from land cooling on each side of an inter-island passage. Applying his many methods, both sail and power can make safe, comfortable and pleasant progress even against normally impenetrable trade winds and seas.

Passages South offers an illustrated manual of instruction for specific passages and harbors down islands as well as a cruising guide for the Greater Antilles islands of Hispaniola and Puerto Rico. It has sailed aboard tens of thousands of boats passaging between the Americas. It should sail with you too.

Orphaned by World War II, Van Sant worked his way through childhood at dozens of crazy jobs. He learned to sail early by borrowing sailing skiffs from beach lifeguards. After university he got a sailboat with a plan that, when the sailboats got big enough, he'd get out of the rat race and go sailing to simpler places for a simpler life. After a decade in aerospace IT he spent four decades of cruising, working as a consultant systems engineer and writing and speaking in countries of Asia, Europe, Latin America and the Middle East, picking up six languages along the way. Returning to the Americas in 1979 he settled into cruising the myriad islands between Florida and South America. Having long ago "copped out" or "gone Galt," Van Sant got used to living freely, without every step insured or hobbled by cat's cradles of regulations, government programs, monthly bills and nettling bosses. He lived without ever-present signs of "NO smoking," "NO fishinig," "No swimming, loitering, littering, entry, passing, parking in the park - NO!." If you want to escape, he can tell you how. You can read some of his and others' adventures in world cruising in his book MARGARITA CAT. Van Sant has, alas, sold his last boat and lives ashore with his wife Rosa in their home, Kembali ke Tanah, high over the sea in the Dominican Republic. See KEMBALI at www.ThornlessPath.com.