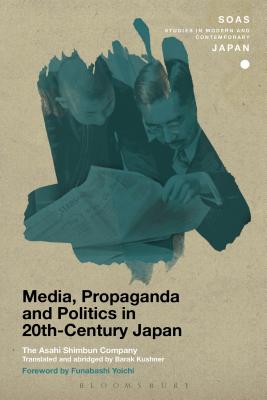 This book investigates the role played by the "Asahi Newspaper," one of Japan's largest daily newspapers, as a mediator of information and power during the 20th century. Members of the staff at the paper, including Funabashi Yoichi, former Editor-in-Chief and one of the most trusted public intellectuals in Japan, examine the paper's role in Japanese history, showing how news agencies assisted in the creation and maintenance of the nation's goals, dreams and delusions. The book draws on internal documents, committee meeting notes and interviews with the staff at the company as a means to narrate what newspaper editors chose to publish during Japan's journey through the 20th century. As well as offering an original insight into wartime media, "Media, Propaganda and Politics in 20th-Century Japan" explores the relationship between media and society during the postwar era and into the 21st century.

Funabashi Yoichi is the former Editor-in-Chief of the Asahi Newspaper and author of many books. He received his Ph.D. from Keio University, Japan and has held numerous academic positions in the US and Japan. Currently, he is chairman of the Rebuild Japan Initiative Foundation (RJIF). Barak Kushner teaches Japanese History at the University of Cambridge, UK and is the author of The Thought War - Japanese Imperial Propaganda (2006), Slurp! A Culinary and Social History of Ramen - Japan's Favorite Noodle Soup (2012) and Men to Devils, Devils to Men: Japanese War Crimes and Chinese Justice (2015).