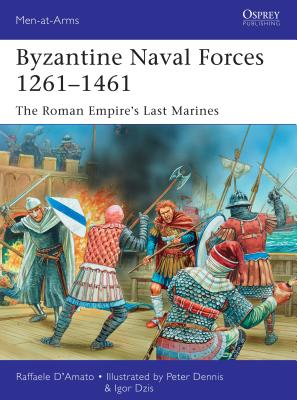 This is book number 502 in the Men-at-Arms series.

After the recapture of Constantinople, Emperor Michael VIII Palaiologos was determined to bring glory back to the Byzantine Empire. To achieve this, he established an Imperial Fleet and raised new regiments of elite marine troops. This work provides a comprehensive, illustrated guide to the unit history and appearance of these men, who were at the cutting edge of the last great height of Byzantine naval power. They won victory after victory in campaigns throughout the 1260s–70s, and though successive periods of decline and partial resurrection followed, these marine units survived until the very last flickers of Byzantine resistance were extinguished. Drawing upon early literary sources, the rich evidence of period illuminated manuscripts, frescoes, and other iconography, Raffaele D'Amato details the lasting legacy of the swansong of Byzantine naval power.
Raffaele D'Amato, PhD, is the author of some 40 books and numerous articles on the military of Ancient Greece, the Roman Empire including Byzantium, and medieval Europe. He has taught at the University of Ferrara, and for two years as a visiting professor at Fatih University, Istanbul. He currently lives in England, working as an archaeological consultant and lawyer for Timeline Auctions Ltd of Harwich, and also as an external researcher for the Laboratory of the Danubian Provinces at the University of Ferrara.

Peter Dennis was inspired by contemporary magazines such as Look and Learn, leading him to study Illustration at Liverpool Art College. Peter has since contributed to hundreds of books, predominantly on historical subjects, including many Osprey titles. A keen wargamer and modelmaker, he is based in Nottinghamshire, UK.

". . . anyone interested in exploring an area of history which is not commonly covered would do well to pick up this title" - Warship International