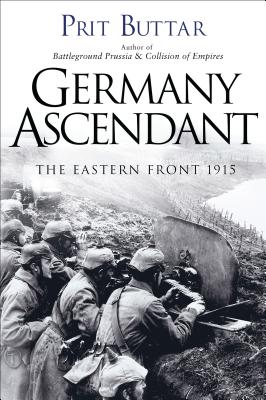 While millions of men died in France and Belgium in 1915, battles equally as large and bloody were being fought on the Eastern Front, as Imperial Germany, Hapsburg Austria-Hungary, and Tsarist Russia clashed on a scale greater than anything seen on the Western Front. These massive offensives were shocking in their scale and intensity, and hugely important. Yet they are largely ignored in the West. Now, with the work of internationally renowned Eastern Front expert Prit Buttar, this story of the unknown side of World War I is finally being told.

In Germany Ascendant, Buttar examines the critical year of 1915, when Germany launched the great Gorlice-Tarnow Offensive, lead by Field Marshal Mackensen. The move, which started as a minor German operation to relieve their Austro-Hungarian allies, ultimately resulted in the utter collapse of Russian forces from all of Poland and Gallacia, and came tantalizingly close to knocking Russia out of the war altogether. Next the Germans led the invasion of Serbia, leading Britain and France to intervene with ground troops, an operation that ultimately failed.

Yet despite this unbroken string of successes, Germany was still hamstrung by a two-front war. Her every attempt to knock Russia out of the war--military and diplomatic--has failed. The stage was then set for the next phase of the war when Russia launched its own counter-offensive that nearly brought the Central Powers to their knees.

Prit Buttar studied medicine in Oxford and London before joining the British Army as a doctor. After leaving the army, he has worked as a GP (General Practitioner), first near Bristol and now in Abingdon, Oxfordshire. He is extensively involved in medical politics, both at the local and national level, and serves on the GP's Committee of the British Medical Association. He appears from time to time on local and national TV and radio, speaking on a variety of medical issues. He contributes regularly to the medical press. An expert on the Eastern Front during both world wars, he is the author the critically acclaimed Battleground Prussia: The Assault on Germany's Eastern Front 1944-45 and Collision of Empires. The author lives in Oxford, England. The author lives in Oxford, England.
"This is among one of the better works on the conflict published during the centennial of one of the world's most destructive conflicts . . . Buttar does an excellent job revealing the struggles of both soldier sand civilians along with the efforts of national leaders to provide for them and continue the struggle." —Christopher Miskimon, Military Heritage Magazine