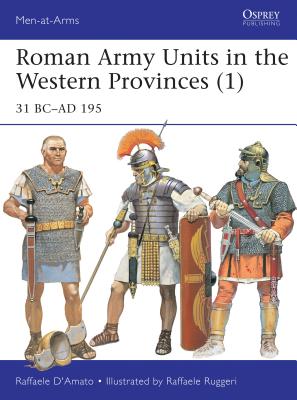 This is book number 506 in the Men-at-Arms series.

Although often portrayed generically in media, decades of research have revealed a staggeringly diverse range of equipment and uniforms used by the Roman army, tracing how these changed through time and how regional deployment caused additional variation. This new title reveals the diversity in equipment and clothing in the Western Provinces across the Roman army, from legions to local scouts.

Packed with full-color, specially commissioned illustrations and information gleaned from the latest archaeological finds, this is a detailed and informed analysis of the Roman army and the equipment and clothing with which its troops were equipped.

Raffaele D'Amato, PhD, is the author of some 40 books and has written numerous articles on the Roman Empire, Byzantium, medieval Europe and the military of Ancient Greece. He has taught at the University of Ferrara, and was a visiting professor at Fatih University, Istanbul. He currently lives in England, working as an archaeological consultant and lawyer for Timeline Auctions Ltd of Harwich, and also as an external researcher for the Laboratory of the Danubian Provinces at the University of Ferrara.

Raffaele Ruggeri was born in Bologna where he still works and lives. After studying at the Fine Arts Academy, he worked in several areas of graphics and design before deciding to devote himself to illustration. He has long been interested in military history and has illustrated a number of books for Osprey including MAA 547, Roman Army Units in the Eastern Provinces (2) and CBT 55, Roman Legionary vs Gallic Warrior.
"If you can’t find some food for great figure modeling in this publication, you’re simply not trying. Highly recommended." - IPMS