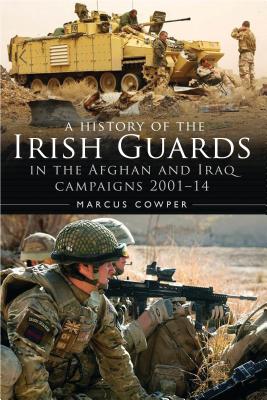 The official history of the Irish Guards in the wake of 9/11, including their combat record in the battle for Basra, Iraq in 2003 and counter insurgency operations in Helmand Province, Afghanistan.

Irish Guardsmen have been involved in all aspects of the campaigns in Afghanistan and Iraq – from in Kabul in 2001, through the invasion of Iraq in 2003 to the eventual withdrawal in 2009, and the campaign in Helmand from 2006 to 2014.

This participation has been at every level from individual to battalion and widely dispersed – a complete picture of the British Army's experience in the post 9/11 years. This study, based on official records and numerous interviews with those who took part – from the brigade commanders down to the guardsmen on the ground – is a unique picture of one battalion's experiences through some of the most testing times the British Army has faced.

Marcus Cowper was born in London, and studied history at the universities of Manchester and Birmingham. He has worked for Osprey Publishing as an editor since 1998, as well as running his own publishing business, Ilios Publishing, since 2002. He has written many works of military history, including Cathar Castles: Fortresses of the Albigensian Crusade 1209–1300 (Osprey), Henry V (Osprey) and The Words of War: British Forces' Personal Letters and Diaries During the Second World War (Mainstream).