Blood, Metal and Dust: How Victory Turned into Defeat in Afghanistan and Iraq (Paperback) 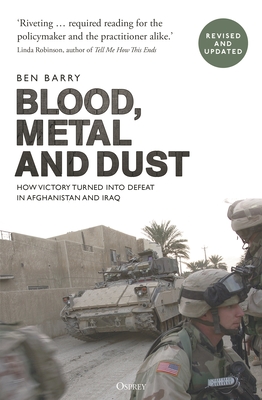 Blood, Metal and Dust: How Victory Turned into Defeat in Afghanistan and Iraq (Paperback)

SHORTLISTED FOR THE DUKE OF WELLINGTON MEDAL FOR MILITARY HISTORY 2021, THE BRITISH ARMY BOOK OF THE YEAR 2021, AS A FINALIST FOR THE 2020 ARMY HISTORICAL FOUNDATION DISTINGUISHED WRITING AWARDS. FIRST RUNNER UP IN THE TEMPLER MEDAL BOOK PRIZE 2021.

Newly revised and updated with in-depth analysis of the current situation in Afghanistan after American withdrawal, Blood, Metal and Dust is an authoritative account of how the wars in Iraq and Afghanistan were played out, explaining their underlying politics and telling the story of what happened on the ground.

From the high-ranking officer who wrote the still-classified British military analysis of the war in Iraq comes the authoritative history of two conflicts which have overshadowed the beginning of the 21st century. Inextricably linked to the ongoing 'War on Terror', the wars in Iraq and Afghanistan dominated more than a decade of international politics, and their influence is felt to this day.

Blood, Metal and Dust is the first military history to offer a comprehensive overview of the wars in Afghanistan and Iraq, providing in-depth accounts of the operations undertaken by both US and UK forces. Brigadier Ben Barry explores the wars which shaped the modern Middle East, providing a detailed narrative of operations as they unfolded. With unparalleled access to official military accounts and extensive contacts in both the UK and the US militaries, Brigadier Barry is uniquely placed to tell the story of these controversial conflicts, and offers a rounded account of the international campaigns which irrevocably changed the global geopolitical landscape.

The International Institute for Strategic Studies is an influential independent international think tank. As Senior Fellow for Land Warfare, Ben Barry has written extensively for IISS publications including Survival, its journal, and Strategic Survey, its annual assessment of world affairs. He is one of the authors of the annual Military Balance, an authoritative assessment of global military affairs. He was the author of 'Combat and Capability: Military Trends since 9/11', published in the 2012 Military Balance. This flagship essay was a concise analysis of the decade of military conflict war from 2001 to 2011.
He left the British Army in October 2010. He wrote A Cold War: Frontline Operations in Bosnia describing his battalion's operational tour under both UN and NATO flags in the mid-1990s. The book was shortlisted for the British Army Book of the Year 2009. His final appointment was leading the British Army's analysis of the lessons of the Iraq campaign, which informs Blood, Metal and Dust.

“At one level Blood, Metal and Dust is a clear, dispassionate and succinct military history of the post-9/11 wars in Iraq and Afghanistan. But it is much more important than that. As the US and UK turn their backs too quickly on both wars, they are in danger of disregarding the lessons and so failing to profit from their experiences. This book puts that right. Ben Barry is forthright in his criticisms and depressingly correct in his conclusions. Blood, Metal and Dust is essential reading.” - Sir Hew Strachan FBA FRSE, Professor of International Relations at the University of St Andrews and former Chichele Professor of the History of War at All Souls College, Oxford

“Blood, Metal and Dust is a seminal work that exploits newly available archival material to produce a riveting account of the allies’ wars in Iraq and Afghanistan. Armed with a keen scholarly eye and long military experience, Ben Barry dissects key decision points and pitched battles ranging from Tora Bora, Operation Medusa and Wanat in Afghanistan to the US Marines’ Anbar campaign, Operation Viking Hammer in Kurdistan, and the Sadr City battle of 2008. His unsparing judgments should inform future war planning, making this book required reading for the policymaker and the practitioner alike.” - Linda Robinson, Senior International/Defense Researcher, RAND Corporation and author of 'Tell Me How This Ends'

“The telling of this particular audit of war is accomplished with precision and with dispassionate honesty. This book is required reading.” - Mark Barnes, War History Online

“This is without doubt the best military history of the campaigns in Iraq and Afghanistan I have read to date.” - Wavell Room

“Blood, Metal and Dust is the essential account of the 21st-century wars in Afghanistan and Iraq.” -Martin Purbrick, Asian Affairs

“This is a must-read.” - This England

“Lucid, wide-ranging and thorough, for students of the West’s recent wars in Iraq and Afghanistan it will remain an indispensable resource for years to come.” - International Journal of Military History and Historiography